Starkehaus: Advice from the Left – Abandon your guns and your God. Let them take care of you. 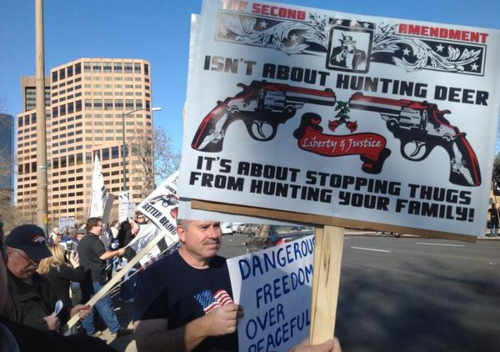 Another mass shooting, another call for increased gun control, another proclamation from the podium that you – yes, you must pay for the evil that other men do.

So people are getting shot? And you no longer believe that a quick trip to the grocery store won't end with you dying in a pool of your own blood?

Well, what did you expect? It's your guns and your God and your big, fat mouths that are the problem here. You brought this upon yourselves because you won't accept new gun control laws; you won't reign in your political dialog about your First Amendment rights; and you won't hand over your existing guns so as to let the government sort out the possible dangers for you.

Hear ye! Hear ye! If you would simply curtail your free speech, your belief in the Judeo-Christian God of all creation and your exercise of your Second Amendment rights, people would stop shooting at you.

Just shut up and hand over your guns. The problem will be solved.

Oh. Right. Well, we'd naturally need to reinstitute the fairness doctrine to make this thing really work. That's a given. Too many ideas floating around out there as you can certainly see for yourselves. They get people stirred up. Ya can't let just any Tom, Dick or Harry dispense political opinions – don't-cha know. People might get upset and they might shoot you. Best to leave the opinion making to state approved media outlets. The free press should be for a well-regulated media after all. There's no reason to believe that the Founders meant otherwise.

And we might want to consider suspending some property rights while we're at it. Let the government divvy things up from now on. You know, make sure there's no reason for people to feel envy. That way they'll have no reason to shoot you.

And while we're at it, we should think about regulating salaries…maybe make college completely free so no one will feel stressed…or want to shoot you. But it will have to be a federally approved curriculum. Obviously. No deviation from official lesson plans. Free expression? Well, that's just not who we are. Students need to feel safe from anything that might challenge the official, approved worldview or they might have to shoot someone.

Is the repetition starting to annoy you? Well, it's about damned time.

And you'll need to drive less. If you will take public transportation…and recycle, buy organic and put solar panels on your government allotted, home-like domiciles? Then the oceans will recede, the wind will never gust above 15 miles per hour and the temperature will remain a balmy 75 degrees every moment of every day. And people will stop trying to shoot you. Changes in temperature make people grouchy and that's just not who we are.

We'll possibly need to tweak the Fourth Amendment a bit to make the transition easier. You know, get used to a little less privacy. Privacy? That's not who we are either. If we're allowed privacy, we might find ourselves participating in activities that make other people feel irritable. And then they might have to shoot you…you gun-toting, God-loving simpleton.

Suspend the Fourth Amendment, huh? You know, for expedience, let's just pitch 1 thru 10. That would be useful for making sure you are separating paper from glass and for reinstituting that fairness doctrine we were discussing earlier. Gotta make sure that no one is engaging in illegal thought crimes or publishing controversial pamphlets that encourage provocative ideas. Sometimes rhetoric makes people cranky and that's just not who we are. It might give someone a reason to shoot you.

No protected rights? No worries. All you have to do is sit back and let the Democrats take it from here. They'll keep you safe. They've got it covered.

From womb to tomb, baby. I mean…well, not exactly the womb. Some babies will have to go. Obviously. Control the birth rate and no one will want to shoot you. You know, and some people will have to head to the tomb a little earlier than they had hoped for too…all those infirmed and elderly, they put stress on the carefully planned society. It makes the free health care more expensive. And that's just not who we are. That makes people want to shoot you.

Oh, yeah. And open the borders. Ya can't control immigration, silly. That's just not who we are. Open them-there borders wide and just let e-v-e-r-y-b-o-d-y in so that nobody will want to shoot you.

Does that about sum it up? I keep wondering. Are voters still craving this game of self-flagellation, or are they finally ready to end it and vote for some actual problem solvers?

No? You're still feeling emotionally attached to your misallocated Judeo-Christian guilt? Still feeling like the Left is justified in scourging you for other people's actions? Great. So let's keep playing.

What was the general response from the Republican presidential hopefuls to the anarchy of gun violence that's filling the void where actual enforcement of current gun and immigration laws should be?

"Our prayers are with the victims, their families, and the first responders in San Bernardino who willingly go into harm's way to save others."

Prayers? Really? And to whom would we be praying then? To God? To God. That's so sublime.

It is a relatively transposed response to a horrific violation of human rights, I think. Cursory. And utterly retrospective. Suddenly we're looking for God's help? Because last I looked, God had been disinvited from any public discourse on violence and cultural decline so as not to offend. Last I checked, God couldn't be a part of any discussion that involves solutions to our moral decay.

Our debates and our actions have to be secularized. Remember? This isn't the Dark Ages after all. Wouldn't want to be thought of as Crusaders. Wouldn't want to be seen as judgmental. That's just not who we are…We're inclusive. Diverse. Multicultural. Everyone's sense of morality is equal to everyone else's. That's who we are.

Hey. It's okay. We can sympathize with the Republican candidates' sentiments in the wake of yet another massacre. It's only natural to pray for solace and guidance after a malediction has occurred. Let's pray for the victims of terror…you know, after it's too late to save them instead of earnestly praying for God's guidance and wisdom in our engagement of deterrence before the terrorism occurs.

I suppose it's a small triumph that we considered Him at all.

But now that we've brought God into the discussion in the most hobbled way imaginable – by asking that He should perform triage on murder victims – what's the response from the New York Daily News to the Republican candidates' prayers?

In their post, the New York Daily News has essentially invited all pro-Second Amendment Christians who dare pray for the victims of this bloodletting to shut their fat pie holes. As far as that particular media outlet is concerned, those Christians who cling to their guns and their God don't care about victims of mass murder. As far as they are concerned, if it hadn't been for Wayne LaPierre, the shooting in San Bernardino would never have happened.

The rest of the mainstream media has been so very surprised and impressed by the bravery shown by the NYDN in condemning the prayers offered by the GOP candidates…they were almost quaking in their hedonistic affectation when the NYDN kinda told Republican candidates where to stick their guns and their bibles. Democrats piled on too…Clinton, Sanders, Obama, Emanuel, Pelosi…how dare conservatives pray for victims of gun violence when they won't pass comprehensive gun control laws. That's just not who we are.

So to all those elected representatives who are suddenly self-proclaimed experts on who I am, let me spell it out in no uncertain terms and avoid any future misunderstanding.

I am… a gun toting, bible thumping Christian who rejects any further gun control while duly noting that my rejection of gun control has no bearing on whether terrorists will attempt acts of terror.

I am… a voter who understands that until Democrats have actually enforced every current law on the books with regard to gun control and immigration – as they vowed they would do when they took their oaths of office – they have no business passing any new laws that will further restrict my rights as an American.

I am… positive that terrorist attacks are not precipitated by changes in the jet stream.

I am… certain that if anyone at the New York Daily News actually took the time to ask God for wisdom, protection and mercy, those prayers would be answered.

I am… confident in the audacity and authenticity of prayer.

I am… telling elected officials and their willing accomplices in the mainstream media that their refusal to do their jobs is precisely what has created our mass-murders and social justice bullies. They are to blame.

Not the Second Amendment. Not Wayne LaPierre. Not bible thumping conservatives. And not me.