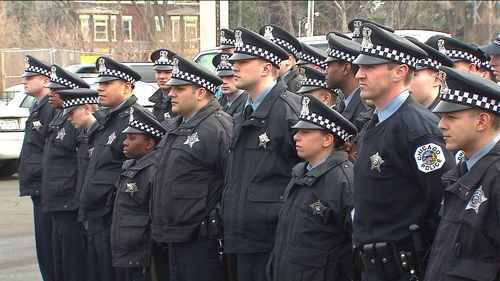 Amid a gathering of think tank, academia, and law enforcement figures at the libertarian Cato Institute to discuss the rise of police scrutiny in the U.S. came Chicago Mayor Rahm Emanuel’s unexpected announcement following the recent video release of a black 17-year-old being shot 16 times by a white officer.

“I formally asked for Superintendent [Garry] McCarthy’s resignation,” Emanuel said in a Tuesday afternoon news conference about the police chief he appointed in 2011. According to the Chicago Sun Times, McCarthy and the mayor had met at City Hall Monday night and McCarthy was not fired.

Laquan McDonald, the black teen holding a 4-inch knife, was shot by Officer Jason Van Dyke on Oct. 20, 2014. The video was finally released when Cook County Judge Franklin Valderrama ruled Nov. 19 that the mayor and his administration, who had fought the release of the police dashboard camera video, had violated the state’s open records law. While Emanuel maintains he didn’t release the recording to avoid interference with the investigation, Valderrama ruled the claim as baseless.

Van Dyke has since been charged with first-degree murder, and Emanuel has tapped several individuals for his new Task Force on Police Accountability to improve police accountability, identify effective ways to track and evaluate officers with repetitive complaints, and recommend how to handle the release of videos with police-involved incidents.

The highly publicized killings of Tamir Rice, Walter Scott, Freddie Gray, and now Laquan McDonald precipitated the Cato Institute’s Tuesday conference, “Policing in America.” During the conference, Cato unveiled its findings from their new survey, “American Attitudes Towards the Police.”