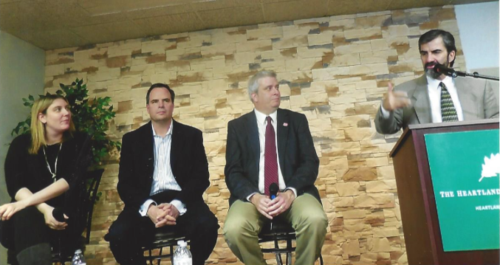 The Heartland Institute sent a delegation of climate scientists and other expert to Paris in early December to attend the United Nations' 21st Convention on Climate Change (COP-21), at which time they conducted a counter-conference, held news conferences, and attended official and unofficial events in Paris.

On Wednesday, December 16, The Heartland Institute hosted two special briefings on how The Heartland delegation was able to rain on the global warming alarmists' parade in Paris — a noon event at the Union League Club in Chicago, with a second after-work reception at Heartland's headquarters at 3939 North Wilke Road in Arlington Heights. Three of Heartland's own staff members, James Taylor, Vice President, External Relations; Jim Lakely, Communications Director; and Keely Drukala, Deputy Director of Communications (whose proficiency in French was a huge asset), recounted their adventures while in France and further gave insight into the real outcome of COP-21.  Listen here to the recording of the Arlington Heights COP-21 briefing.

But why did Heartland think it so important to send a delegation to COP-21, as it had never before attending a U.N. climate conference?  As related by Heartland's President and CEO Joseph Bast:  Heartland's earlier trip to the Vatican in April of this year (2015) prompted Heartland to seriously consider attending COP-21 in Paris. Particular concern arose over how the Pope was becoming a climate alarmist for the U.N. through his proclamation that humans were causing a climate crisis.  Additionally, since this nation is hemmed in by the imposed carbon restrictions which cannot be rolled back, big government had to be resisted and freedom and the free markets protected.

On the plus side, Heartland's Vatican event produced straight news, unlike the indisputable bias of the media here in the U.S. The result:  Heartland, while in Rome, created international news heard all around the world.

Fueled by memories of more honest reporting by the media during Heartland's Rome sojourn – held within a stone's throw of the Vatican — it was decided a week before the Paris summit took place that Heartland should go to Paris to attend COP-21, billed as the last chance for the assembled 196 nations to save the planet.  A request for funds ensued to send the Heartland delegation to Paris. Bags were packed, air travel arranged, and hotel reservations made at the Hotel California in Paris.

When word got out that Heartland was going to Paris, a letter was sent by university professors in Canada, also signed by the American head to the U.N. ambassador, requesting that The Heartland Institute be criminally prosecuted for spreading lies about climate change. A letter was likewise sent to Interpol accusing Heartland of drug smuggling, which only proves that Heartland was providing an effective, unwanted challenge to those promoting climate change doctrine based on false science. It got personal for James Taylor. As one of seven individuals, accused of intimidation or harassment, he found his face on a wanted poster plastered around Paris. Heartland's "Day of Examining the Data"

December 7, 2015, was promoted as the "Day of Examining the Data with the Heartland Institute", starting with an hour-long press conference held at 9:00 a.m. in Paris.  Even though the time was 2:00 a.m. in Chicago, the press conference still attracted 1,800 individuals who tuned in for all or part of the program.  Protesters did try to obtain entrance into the room dressed in clown suits, but the door was blocked.  Unfortunately not a single question was asked by the media during the news conference about the science of global warming, but, as is often the situation, Heartland's funding was questioned.

The seven hour program presented by Heartland on December 7, broken down into segments from start to finish as listed below, can be viewed here.

Following are COP-21 experience highlights as related at the Arlington Heights briefing:

The skinny behind the COP signed proposal

As related by Joe Bast, President and CEO of The Heartland Institute, it is difficult to argue with people who are driven by emotion and not reality.  Although the treaty (really a statement of purpose as a treaty needs Senate approval) was hailed as a victory, signed instead was a hollow and toothless agreement, a single non-binding document to which all nations agreed in the wording.  As such the document is but a "delusional fantasy" with its assumption that to save the planet we only need to reduce so-called global warming to below two degrees Celsius.  Let’s not kid ourselves, it's all about the redistribution of wealth and whose going to receive the money on a global scale.  Even this isn't mandatory. There was no discussion about the sun's influence on the climate.

For President Obama the toothless deal was a way to save face and to further hail his participation in COP-21 as a major accomplishment as he leaves office.  After all, hasn’t Obama proclaimed that global warming is the biggest threat faced by the American people?

How much are the American people willing to pay to fight global warming? Polling indicates that the issue comes in almost dead last.  At a price tag of $500 a year and more per family, there is no question the American people would soundly reject what environmentalists are proposing if they were permitted to have their say.

As Joe Bast said in his concluding thoughts:  December 12, 2015, represents the day the Global Warming movement died, and it died in Paris.