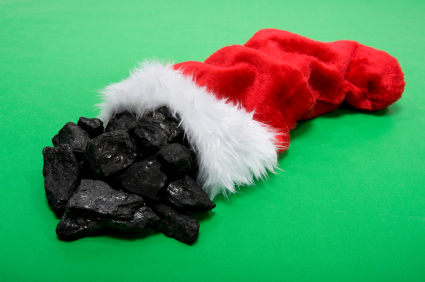 WASHINGTON - Tax Vox's Lump Of Coal Awards For The 10 Worst Tax Ideas Of 2015 listed in Forbes includes Illinois – not so much for Illinois' fiscal craving for higher taxes, but more so because the state legislature and the governor have not yet come to a budget agreement.

On one hand, Illinois was paired up with Pennsylvania because neither state has an FY 2016 budget.

9. Illinois and Pennsylvania. At least Michigan passed a budget. In Illinois, Republican Governor Bruce Rauner wants to reduce business costs while the Democrats who control the state legislature want to raise taxes and cut spending. In Pennsylvania, Democratic Governor Tom Wolf wants to raise taxes and GOP state legislative won’t go along. Meanwhile, the fiscal year is now six months old and neither state has a budget.

On the other hand, Illinois was near the bottom of the top 10 listing of worst ideas. It could be much worse, according to Tax Vox. The lump was also presented to those that passed the ridiculously low $305 billion Highway Spending measure that will barely touch the need for repairing the nation's ailing infrastructure, most of which will have to come from somewhere else – like more debt.

The worst of all, according to the group is how the GOP presidential candidates are proposing tax cuts with no foreseen way to pay for them.

The details are HERE.