Emanuel recall bill may be more bluster than bite 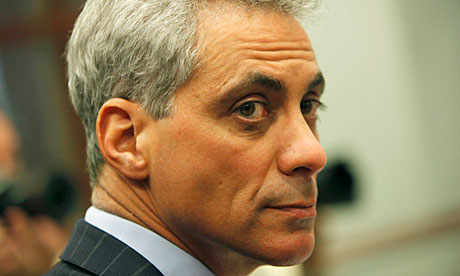 CHICAGO - Even if the recall legislation State Rep. LaShawn Ford (D-Chicago) introduced in December was to reach Governor Bruce Rauner's desk and he signed it into law, it may ultimately take a lawsuit to have any effect on Chicago Mayor Rahm Emanuel.

In the past, Illinois courts have ruled that election code changes such as a recall law do not affect those currently holding the office, only those that come into office after the bill become law.

So, despite Governor Rauner's willingness to sign the bill into law, all the uproar and demand for the right to recall Rahm Emanuel as Chicago's mayor would most certainly end up in Illinois courts – by either the mayor resisting or the mayor's enemies pressing for immediate application.

And that's fine if that's what it takes, says State Rep. Jeanne Ives (R-Wheaton), who has signed on as a co-sponsor to Ford's proposal.

"My take is that it is worth a lawsuit to find out," Ives told Illinois Review. "It seems to me that public sentiment is against Mr. Emanuel continuing to govern."

Ives is right about that.

Mayor Emanuel's popularity was always fragile, but since the public discovered his office was hiding a shocking video of a 17 year old being shot 16 times by a Chicago officer, calls for him to resign have hit Chicago's streets. The video – withheld for a year and released only then due to a court order –  topped the city's embarrassment of out-of-control gang wars and crime in Chicago's struggling neighborhoods.

Chicago Police Superintendent Garry McCarthy was the first to be thrown under the bus. He "resigned" under pressure shortly after the video hit the Internet.

Thus far, two members of the Illinois House's Democrat black caucus have signed onto Ford's legislation as co-sponsors – one besides Ford, is State Reps Mary Flowers. Chicago Democrat and Jaime Andre, Jr has also signed on.

In addition, 15 Republican House candidates have voiced their support for the effort.

Illinois Opportunity Project's Dan Proft is calling on more Chicago Democrats and Republican leaders to add to the pressure on Emanuel. He says that all the speculation that the law wouldn't apply needs to be argued in court.

"We argue it should apply to Rahm this term upon signature into law," Proft told Illinois Review. "If Rahm wants to litigate it, let's do so. The worst case scenario is an appropriate recall mechanism in place for Chicago mayor and aldermen a la the mechanism in place for the Governor and state legislators on a go-forward basis."