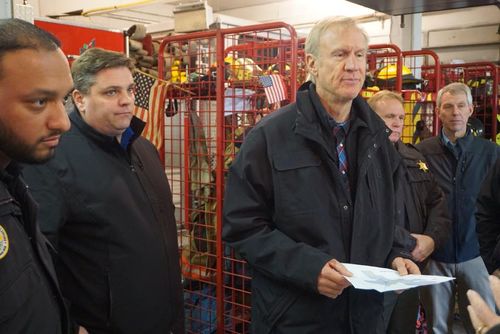 “The impacts of this flood event have been felt in many communities across the state,” said Gov. Rauner. “We’re continuing to provide personnel and resources communities need as they battle flood waters and begin their recovery process.”

A state disaster declaration makes a wide variety of state resources available that can help communities respond and recover from flooding.  Such resources include sandbags, sand, pumps, trucks, inmate crews and other assistance to ensure public safety.

The State Emergency Operations Center (SEOC) in Springfield was activated Dec. 28 to coordinate the state’s flood response and has operated since that time to coordinate deployment of state personnel and resources to help communities protect public health and safety.

As flood waters begin receding in some areas, local emergency management agencies are beginning to collect damage information from affected people and units of local government. That information will be forwarded to the Illinois Emergency Management Agency (IEMA), where it will be reviewed to develop a picture of the overall impact on people and local governments.

If the initial damage information shows losses that may meet thresholds for a federal disaster declaration, the state could request that the Federal Emergency Management Agency (FEMA ) join state and local officials for a more thorough assessment of the damage.  If it appears the state meets the federal assistance criteria, the governor could request a major disaster declaration from the President.

There are two separate federal assistance programs. The Individual Assistance program offers grants and low-interest loans to people affected by disasters. The Public Assistance program provides reimbursement up to 75 percent of eligible costs incurred by local governments as they dealt with the disaster and subsequent recovery.

While there is no defined damage amount for Individual Assistance, the state’s past experience with requests for federal assistance shows that it takes hundreds of homes with severe damage to qualify for the program. The Public Assistance program does have a population-based threshold, which for Illinois is $18.1 million statewide. Once the state meets the statewide threshold, individual counties would also have to meet a threshold of 3.56 times the county’s population.

“Flood waters need to recede before local officials can get an accurate accounting of the damage,” said Joseph. “Our staff is working closely with all of the affected counties to help the process proceed as quickly as possible.”