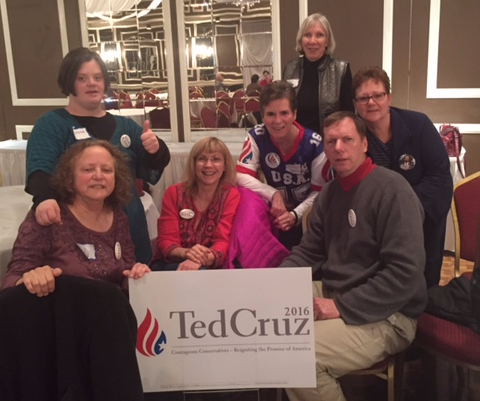 The Chicago area participated in the Iowa Caucus last Monday night by having a Ted Cruz Watch Party. It was held at the Diplomat West Banquet Hall in Elmhurst, Illinois.

An enthusiastic crowd watched a big screen television and cheered each time Cruz was shown in the lead, which was most of the evening. The party was attended by Cook County Review Commissioner Dan Patlak, Jill Dolan from the Republican Women of Park Ridge, Blair Garber from the IL GOP State Central Committee, and Bradley Wulfsohn from the North Shore Tea Party.  There was also  a large contingent from Walsh Freedom, a grass roots group associated with radio host Joe Walsh. Many people stopped in throughout the evening. The event was hosted by Steve Orlando, Steve Balich, and Yvonne Bolton – all delegates for Cruz on the March 15th GOP primary ballot in their respective congressional districts. Chicago radio host Dan Proft was one of several speakers.

Nick Kammer from the Cruz campaign talked about the Illinois effort. Chicago GOP chairman Chris Cleveland also spoke. Cleveland is on the Ted Cruz for Illinois campaign committee and attended Princeton with Senator Cruz.  He remarked, "Ted Cruz would be a great guy to have a beer with, in fact I did on several occasions in college." He also went on to explain that what you see from Cruz on the campaign train is what he feels and believes. The Illinois primary is Tuesday March 15, 2016. Ted Cruz is expected to do well here.

I'm predicting him to win Illinois and the Republican presidential nomination.