The Media and Mr. Trump

As Patriot Post notes – "it’s true that the Leftmedia don’t love Trump, but that doesn’t mean they don’t love to cover him." In fact, they love to cover him to the tune of almost $2 billion in free coverage, according to a new study. For comparison, the next closest presidential candidate is Hillary Clinton at $746 million. In fact, you have to combine Clinton with the entire Republican field to reach the coverage Trump alone has received.

National Review’s Jim Geraghty considers the implications: “A more skeptical Republican electorate would ask, ‘Why?’ Why are television media institutions usually hostile to Republicans suddenly going ga-ga and obsessing over every word the GOP front-runner says? Why are they so eager to cover his rallies live? Why do they allow him to call in to the Sunday shows? Why do they have ‘town hall meetings’ with softball questions? Why are his prime-time press conferences aired live and then dissected by a team of analysts? Is it because these television producers, anchors and programming directors have suddenly come to appreciate his call for a border wall, deportation of all illegal immigrants and a ban on Muslim immigration? Or is it because they think he confirms every negative stereotype of the conservative movement and Republican Party, that he’ll get demolished in a general election, and he’ll take a lot of Congressional Republicans down with him?” 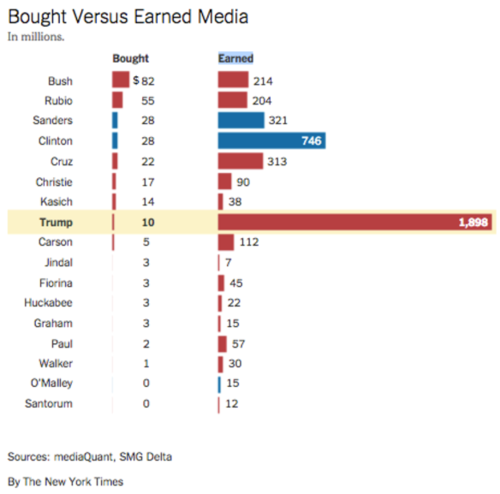