Where’s Weyermuller? With Heidi Cruz at City Club of Chicago 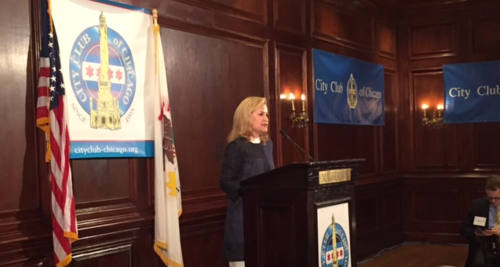 The Ted Cruz presidential campaign is here in Chicago all week starting today with a breakfast with the candidate's wife, Heidi Cruz. The subject title  was called: "What would a Ted Cruz presidency look like?"  She spoke in the Democrat stronghold, City Club of Chicago at Maggiano's in River North.

Heidi Cruz spoke for about 25 minutes then took about a dozen questions. She had three main bullet points: Security, growth, and liberty.

During Q&A, she was asked, "What would a President Cruz do to protect religious liberties?"  Her answer was simple, "Follow the constitution," which was met with loud applause.

I asked about her speech Wednesday night at 6:00pm at the Pickwick Restaurant in downtown Park Ridge. I indicated the location is just four blocks from Hillary Clinton's childhood home.

My question: "What are your thoughts  on Hillary?" She probably could have given a speech on the question but used her time to describe how great a Ted Cruz presidency would be. 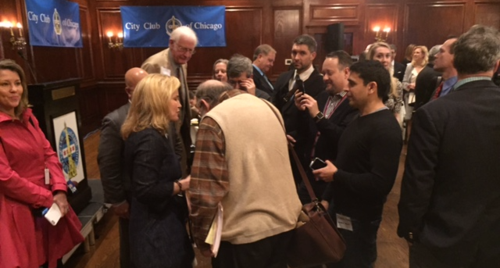 The Maine Township Republicans that are hosting Heidi Cruz tonight, also hosted the film "13 Hours" a few weeks ago at the Pickwick. The film chronicles the 13 hours of the attacks at the consulate in Benghazi on September 11, 2012.

One unnamed person at my table said, "Heidi Cruz would make a great presidential candidate."

Her next stop was Homer Glen to continue a series of meetings and appearances all day. Her father-in-law Rafael Cruz (Ted's dad) is also making several appearances in Illinois this week. Ted Cruz himself will be here Friday for two Republican dinners.

There is lots going on building up to the Illinois Primary this Tuesday, March 15, 2016. I have a ticket for the Donald Trump rally at the University of Illinois Pavilion at 6:00 pm Friday night.

Ohio Governor John Kasich is doing three townhalls today in the Chicago area. I have a seat tonight for his Chicago appearance which will be on the Greta Susteren Show live on Fox News at 6:00 pm CST.

No sign of Marco Rubio in the Chicago area as social media is alive with rumors that he may suspend his campaign as soon as today or after the CNN debate Thursday night. His showings have been weak and there are concerns as primaries in Ohio and Florida are also next Tuesday.

I'll be watching debate Thursday night live at the Austin Fuel Room, a tavern in Libertyville. Former congressman and current talk radio host Joe Walsh is doing his show live there from 5-7pm on WIND 560-AM before we all watch the debate.

If you are not worn out, Saturday at noon is the Annual Saint Patricks Day Parade on Columbus Drive in Chicago at noon. Illinois House Speaker Michael Madigan is the Grand Marshall. Since it is rumor season, is it possible Trump and Cruz might march in the parade as they will be in town? I'll be there either way, dressed in green.

Don't forget to vote in Illinois this Tuesday, March 15, 2016. One footnote is to be sure to vote your candidate's delegates too.  Full disclosure, I'm voting for Ted Cruz next Tuesday.