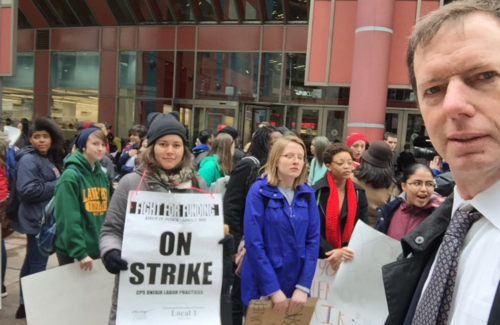 They were calling it "A Day of Action." It was not a typical April Fools Day in Chicago as thousands of Chicago Public School teachers protested in downtown Chicago. The one-day strike closed 680 schools in the city. That was no April Fools joke as 400,000 students missed a day of school and caused massive traffic congestion in Chicago's Loop.

I was working downtown so I got the chance to see it up close. Throughout the day teachers and supporters, including many students, marched at various locations in Chicago. The main protest was at 4:00pm, where all the protestors met at the State of Illinois building on Clark and Randolph.  This is across the street from Mayor Emanuel's City Hall. The police and media were estimating the crowd  to be around 20,000. My count was around 6000 people which was about the same same as the Pro-Life March a couple months ago which I also witnessed. What amazed me was the number of police, many on bikes. The police circled and blocked each door at the State of Illinois building to preventing entry by the protesters. Some like me questioned the police resources being used here along with the cost as crime is growing in the neighborhoods. I wandered through the crowd as CTU President Karen Lewis spoke on a stage near the building entrance. It was hard to hear, so most were just holding signs and mingling as they blocked several streets during the height of rush hour. Many were holding home-made signs bashing Mayor Rahm Emanuel and Governor Bruce Rauner.

So much of the theme is concern over the lack of a state budget and school funding. Teachers are generally well liked and highly respected and surely deserve to be well compensated. The teachers basically want more money. One argument is the amount of lack of state income tax money which goes to schools yet little is said about the huge property taxes in Chicago. Teachers in Chicago are some of the highest paid in the nation especially when considering pensions and benefits.

For me, I would lIke to pay teachers in Chicago more money. The problem is there is no new money. The citizens are already overtaxed with the highest sales tax in the nation and one of the highest property taxes. People are leaving Chicago and Illinois in large numbers. This is confirmed by the recent census that included losing one congressional seat. DNA Info is reporting that CPS has 6000 less students than last year. We really should be talking about more consolidation and school closures than pay increases.

Of course, few are talking about the pension mess, which is an unsustainable plan with little means to survive. Many feel a bankruptcy is the only solution with a new future plan of having teachers in Social Security or private IRAs to avoid yet another future fiscal catastrophe. These actions have consequences. Again, little is being said as city services and jobs are being cut. Free city garbage is being eliminated (not free as included in property taxes) to thousands in the city this month. Smaller apartment buildings will be charged $10 monthly per unit added to their water bill while other larger buildings including 4-6 flats are being eliminated altogether. Several years ago, the city added a sewer charge that doubled water bills. Point is, taxes and costs of living in Chicago are steadily going up for years. We are at a tipping point.  Many are saying we are following the Detroit business model.

Businesses are closing at an alarming rate and worse, new businesses are not coming in. This means loss of jobs and loss of sales taxes. People are leaving Chicago because of high crime, poor schools, huge taxes, over regulation, and poor public policy including massive mismanagement and corruption.

For me the solutions are cutting  the size, scope, and cost  of government. This is cutting taxes, cutting spending, less regulation, and less borrowing which will create more freedom, liberty, and opportunity for all.

This might include school choice with more charter schools, private schools, religious schools, homeschooling, and vouchers. Competition in education may be good with eliminating of public section unions  making Illinois a right to work state.

The teachers want more money. There is no money. Where do we go from here?