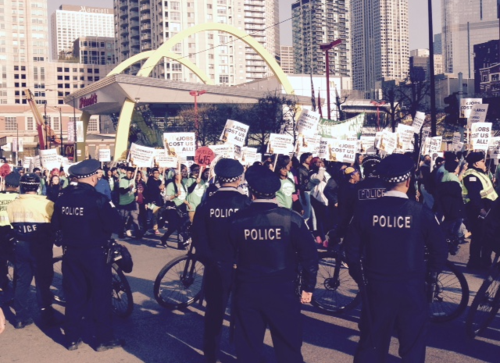 Here we go again, another Chicago protest. It's seems like I run into them on a daily basis.

Thursday's protest was centered at the Rock & Roll McDonald's in River North. About 1500 people marched, chanting, "Shut it Down!"  There were several hundred Chicago Police officers controlling the crowd on foot, bikes, horses and in vehicles. The march appeared peaceful, but it disrupted traffic on Clark, Ontario, Ohio, and LaSalle streets. While I support free speech, these protests are costing taxpayers millions of dollars in city resources, while diverting police away from doing regular police work in Chicago's neighborhoods.

Billionaire business man Ken Griffin was the target of some of their complaints Thursday, as his hedge funds contain a large amount of McDonald stock. Indirectly you could say he owns the company. Griffin was a major contributor to Governor Bruce Rauner's campaign, who was also targeted by the protesters.The irony is many union pension funds are invested in these hedge funds, so they could be protesting against themselves. Many of protesters were from organized labor, including Chicago teachers that marched just last week.

These protests seem to occur on a regular basis now in Chicago. It all seems silly to me, as everybody wants to make more money. Fast food businesses will just automate more, raise prices, or just go out of business — especially in Chicago.  And I don't want to pay $20 bucks for a Happy Meal.

DNAinfo.com reports that Chicago already has a declining population as evidenced by having 6000 less kids from the previous year in the public schools. In my opinion, people are leaving Chicago because of poor schools, high crime, massive taxes and government corruption. The solution seems simple: less taxes, less spending, and less borrowing. This would create more jobs with freedom, liberty and opportunity for all.

Why not raise the minimum wage to $100 an hour or even $200?  Why not?  Because it just won't work. We need to encourage businesses in Chicago, not chase them away.