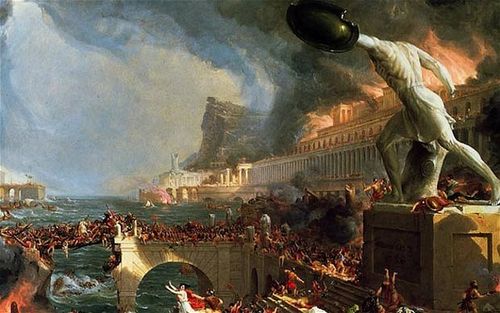 Our ancestors must be rolling over in their graves seeing what a farce Western Civilization has become. The lack of will to patrol our borders and the political correctness that has led to a veritable invasion of Europe, our leaders of the last 30 years resemble the same Merovingian Kings of early France that were unable to muster a serious defense of the Iberian Peninsula against the invasion of the Moslems led by Tariq, after whom Gibraltar is named. Our society today can be labeled as nothing less than absurd considering that a serious discussion of something as strange as transgender bathrooms is taking place. However one feels about this issue, it is undeniable that civilizations on the rise do not bother themselves with such inanities.

But Western Civilization has faced serious crises before and has thankfully emerged intact and often stronger than ever each time. It can happen again. The United States is still the undisputed leader of Western Civilization and has at least $300 Trillion in assets and a population of about 330 million. The next great era lies ahead if this newest version of America can be allowed time for assimilation.

But the leadership must change, and soon. The current elite of the Republican Party are trapped in the tractor beam of their Randian ideas that have warped their minds seemingly beyond repair. The Marxists in the Democratic Party have used this division in the GOP to their advantage advancing their culturally destructive agenda. This new leadership must be dynamic, vigorous and unapologetic enough to change the trajectory of sociological decline we are on. Otherwise there will be no hinge event upon which future generations can say that we kept the faith. We will have stared into the abyss and blinked. Fortunately, the past holds some examples that show we can revive and prosper if we stand firm and act to assert ourselves.

One of the oldest struggles in history stretching back at least 2500 years is the long-standing rivalry between East and West. Many “hinge” battles that have taken place in Western Civilization’s long run have revolved around a threat from the East being pushed back by a heroic figure.  Around 480 B.C. the Persians under the Emperor Xerxes saw the Greek city-states like Athens and Persia as a threat to their commercial and political dominance of the eastern Mediterranean. King Leonidas of Sparta led a heroic defense with 300 Spartan warriors holding off tens of thousands of Persians at the pass at Thermopylae. Shortly thereafter Themistocles of Athens won a key naval battle against the same Persians at the battle of Salamis. These key hinge battles saved Greece and gave us the birth of Western Civilization allowing democracy and the rule of law to germinate.

Roman civilization continued the march from pure democracy to a more republican form of government and also established legal principles of private property rights and the use of courts to arbitrate disputes. But Rome also holds warnings about the future as it disintegrated as a civilization.   Rome fell due to many factors, but one of the most important was the decadence of its citizens. It became effete and not focused on family formation. Sound familiar? Economic policies included debasement of the coinage and higher taxation. It all led to their demise in the 400s A.D. But at least the Papacy and the Byzantines carried on the lineage of the West into the Dark Ages.

About 300 years later a new threat from the East emerged as the Moslems conquered the Middle East, Egypt, the Maghreb and even entered Spain and threatened the Pope in Rome several times.  Germanic tribes had established fledgling kingdoms in western Europe one of which was the Frankish kingdom established by Clovis of the Merovingian line. Over time though as happens with most dynasties the leadership qualities wane in subsequent generations. So as the Merovingian kings became more and more feckless, the Frankish kingdom was threatened by a Moslem invasion.

At the key hinge battle of Tours (or Chartres) in 732 A.D. Charles “The Hammer” Martel of the new Carolingian dynasty stopped Moslem advance in southern France and began a long process that eventually led to the expulsion of eastern civilizations from Europe. Access to Christian holy sites was secured with the agreement reached by King Richard III of England and Saladin at the Third Crusade in the 1100s.

400 years later though the West was threatened by a new invigorated East with the rise of the Ottoman Empire which dominated the Mediterranean Sea. Periodic raids terrorized Greek and Italian towns and islands often bringing slaves back to the Middle East for sale. Horror stories of Ottoman mariners flaying captured Venetian and Genoese sailors also reached Christendom. Ottoman troops were also conquering the Balkan peninsula and eventually threatened Habsburg strongholds in Austria.

But a now Christianized and resurgent Spain led by Philip II defeated the Ottomans at the naval battle of Lepanto in 1571 and secured the Mediterranean for Western trade. Polish patriot Joseph Sobieski also ably led Habsburg forces against an Ottoman land attack near Vienna in 1683. After this the Ottoman Empire was on the decline and European civilization was secure to rise and eventually dominate the world.

With that dominance though came the risk of philosophical infection. The cure of one problem led to the germination of another. By the 1800s this infection was mostly internal and revolved around whether Marxism was a palatable economic and political system to govern the West itself. But as the Age of Imperialism came in the late 1800s some leaders in the West became convinced, despite the manifold benefits of Western technology brought to undeveloped parts of the world, that the colonial system was unjust, not to their own countrymen, but to those the West colonialized. Bleeding heart liberalism was born.

One of our own Presidents, Woodrow Wilson, convinced himself that it was the new mission of the United States to spread democratic ideals to the rest of the world. Hey, it worked for us, why not for everyone else? His 14 Points peace plan in Paris after World War I embodied this in his calls for self-determination for all peoples of the world. America had fought to make the world safe for democracy and now it was going to extend such ideals worldwide.

Of course, one can easily counter that it may have worked in the West because the concepts and ideas of democracy developed slowly over time and were fought for by those in the West. The West also went through the period of the Enlightenment whereas other countries of the world had not had this developmental sociological experience. Yet since 1919 the United States has taken it upon itself to be the “do-gooder” of the world.

Today with the rise of modern communications, the urge to help has reached epidemic proportions. Our leaders truly do seem to care more and more about everyone else rather than their own country.   Their empathy dripping has gotten so severe that the federal government is now helping refugees in Utica, NY get summer jobs. Perhaps this latest example is just another deliberate poke in the eye by the Obama administration on its way out. The roots of this malaise are deeper. The promotion of free trade and open borders that has mostly hurt the working class of our own country is certainly central to it. But the cultural Marxist advances in the United States since the 1960s have made our retreat from being a true multi-ethnic nation have also done serious damage to the spirit of this nation. It almost feels like we are committing suicide as a nation.

It seems as if every election in our country we hear the statement that “this is the most important election in a long time”. Actually, it doesn’t seem like that. We do hear that. But maybe this time, like how a stopped clock is always right twice in the day, this time the phrase rings true. We do seem at a turning point like the examples above. Our country has imported so many millions of immigrants that it is in serious danger of losing its character. Our culture has suffered immensely from the moral rot of the Left with its support of 50 million abortions, gay marriage, no-fault divorce, political correctness and now transgender bathrooms. Our economy has been so significantly altered from free trade that one can travel whole swaths of the country and see one industrial ghost town after another. Suicide rates are up in many subsets of our population. Drug use is rampant in some quarters. It’s all very depressing.

Yet, it’s not over. It’s just high time, like in the past, for a Hero. Today our heroes win at the ballot box and not in the battlefield. Will we seize this opportunity? Or will we fall like Rome? Time will tell.