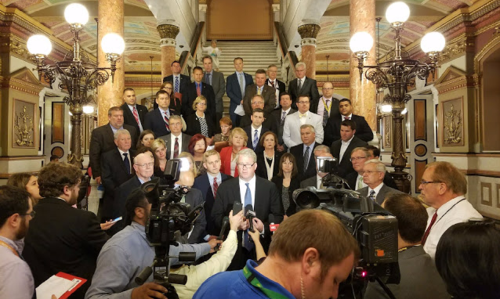 SPRINGFIELD – With six days left until the May 31st session deadline, and bi-partisan budget working groups still meeting, House Speaker Mike Madigan called the chamber into session and plopped down a 500-page budget before members.

"I was going to say this is a phony bill, but I don't know what's worse than phony," Republican Minority Leader Jim Durkin said in floor debate.

Within 90 minutes, Madigan's FY2017 budget was voted upon, passed and the House adjourned for the night.

Republican House members, surprised and stunned by the Speaker's move, began reaching out to constituents via Twitter, text and Facebook with photos of the bill and comments about the action – breaking all of the Speaker's own House rules.

Next to the photo above, State Rep. Peter Breen (R-Lombard) posted on Facebook, "Here's the 500-page $40B spending bill the Dems dropped on us 90 minutes ago. We'd need a 47% increase in the income tax to pay for this trash." 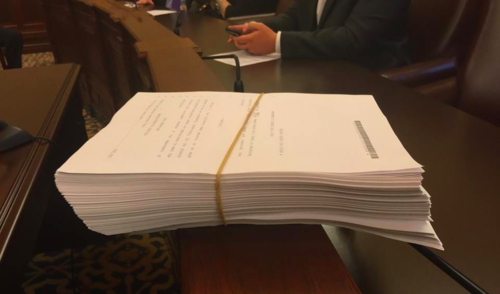 Within minutes, the GOP caucus learned that Madigan's budget exploded next year's Illinois state budget by $7 billion – a deficit that would force the taxpayers of Illinois to hike the state's income tax to over five percent in order to balance.

"Speaker Madigan filed a 500 page spending bill 1 hour before calling it for a vote tonight. What we know about this bill is that it would push state spending over $40 billion for FY17. That is $7 billion more than projected revenues, and according to the Governor’s Office of Management and Budget the measure would require an income tax rate of 5.5% to balance the budget," Durkin posted on Facebook with the photo above.

"What they are attempting to do tonight is the biggest insult on Illinois taxpayers I’ve ever seen. Apparently, Democrats have adopted Minority Leader Nancy Pelosi’s philosophy of, ‘We have to pass the bill so we can find out what is in it.'”

State Rep. Mark Batinick (R-Plainfield) voiced his disgust with the events, saying that besides the budget outrage, "It got worse …" House Republicans were denied a verification vote.

In the rush, all Democrats voted for the bill and all Republicans voted against. But no one really knows who was on the floor to make that sudden roll call because House Republicans were denied a vote verification. Democrats also limited the floor debate on a 500-page bill to less than an hour with a parliamentarian move.

The bill now goes back to the Illinois Senate to accept the changes made in the House Wednesday night.

Madigan's move was likely an explosion after earlier in the day, three of his Democrat caucus refused to override Governor Rauner's veto on a bill to force arbitration with AFSCME's contract negotiations.

If Cullerton's Democrat Caucus in the Illinois Senate passes the House budget, it is expected that the Governor will veto the budget the House Democrats passed sans any of Rauner's Turnaround Agenda – and the Democrats, AFSCME, teacher's unions, unpaid non-profit subsidiaries and agencies will hit the media and mailboxes blaming the growing unpopular Rauner for what they're already referring to as his "stubbornness and incompetency."

More on Illinois Review about this HERE and here's the roll call on SB 2048: