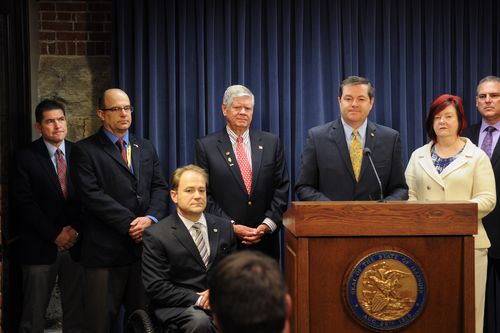 SPRINGFIELD – It has been 100 days since a group of Illinois lawmakers called for newly-appointed Auditor General Frank Mautino to explain suspect expenditures listed on his now-closed campaign war chest.

"I'm sorry, but if our Auditor General cannot be forthright with his own expenses, and auditing practices, then I place a high level of scrutiny on anything, any work product coming out of his office under his leadership," said State Rep. Grant Wehrli.

For some reason over 10 years, Auditor General Frank Mautino spent $213,000 on car repairs at this local auto shop. Lawmakers want to why.

“The Times reported that the State Board of Elections was seeking clarification from then-Representative Frank Mautino about $259,000 he paid to a Spring Valley bank since 1999. A Daily Herald editorial was also calling for some answers. A letter was sent to Auditor General Mautino asking for timely answers to the questions that were raised,” Oberweis said.

“I was the only member of the Legislative Audit Commission to vote against recommending then-Representative Mautino’s appointment to the Auditor General position, even though we all knew the ‘Illinois fix’ was in for Madigan's guy.  We had interviewed another very highly qualified candidate for the position who I believed should have been recommended as well.”

A group of twelve legislators from the House sent the initial request to Auditor General Mautino on February 1st asking for a written reply within 10 days. Mautino replied on February 9th, that he needed more time to properly address the request. To accommodate the Auditor General, the lawmakers on February 11th extended their request deadline to February 25th.

Mautino replied that he had retained a legal firm to assist him and would be working ‘…during the next few weeks in order to respond to your letter.’

The lawmakers released the correspondence today, stressing their growing frustration with the continued delays.

“Now that it’s been more than three months since our first official request for information was sent to Auditor General Mautino concerning the irregularities in his campaign records, I think it’s reasonable he provide some answers. After this much time and multiple requests, he owes it to the residents of Illinois,” said Representative Sheri Jesiel (R-Winthrop Harbor).

“The Auditor General’s office is vital to the review of all state spending and is essential in protecting the taxpayers’ money from waste and abuse,” Rep. Wehrli said. “Until Auditor General Mautino provides answers to questions about highly questionable spending and accounting that continue to surround him, I will have no confidence in any audit conducted under his leadership.”

By Illinois ReviewLocal Illinois Republican leaders from the 82nd...
Previous article
Schuster: To those not happy with this election cycle
Next article
Foster: The long string of presidential sociopaths is about to get longer