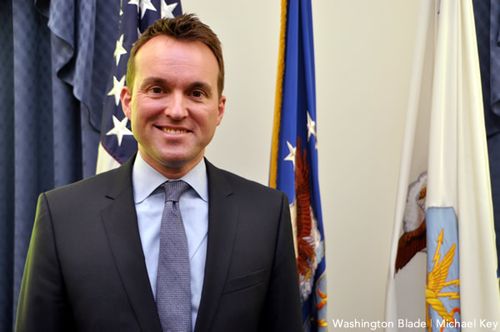 WASHINGTON – In a voice vote, the U.S. Senate voted to confirm the first openly gay Secretary of the Army this week. Eric Fanning was nominated for the position by President Obama a year ago.

"The voice vote approval Tuesday came after Sen. Pat Roberts, R-Kan., dropped his opposition to Fanning after a senior Pentagon official told him that no detainees held at Guantanamo Bay, Cuba, would be sent to the Army prison at Fort Leavenworth, Kansas, or other facilities in the United States," The Associated Press reports.

Fanning told the gay news source Washington Blade that he had hopes of making changes to make the military more open to lesbians, gays, bisexuals and transgenders.

One of the changes Fanning proposes is

In respect to calls for an explicit non-discrimination policy, the Pentagon has consistently said it treats all service members with respect without committing to a new policy.

“Speaking personally, I always think it’s important to have non-discrimination policies codified to include everyone,” Fanning said. “The military, because it has a chain of command, has a different attitude about this and a different way to try to go about protecting airmen, sailors, soldiers, Marines — but Eric Fanning? Yes. I personally like to see these things in writing and codified.”