Whitehead: A Week in the Life of the American Police State 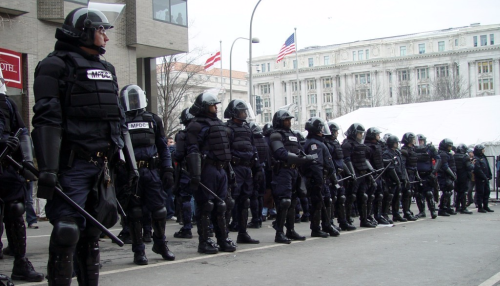 “Those who corrupt the public mind are just as evil as those who steal from the public purse.”—Adlai Stevenson, 23rd Vice President of the United States

If you’ve been caught up in the circus that is the presidential election, you’ve likely missed the latest news about all the ways in which the government continues to erode our freedoms, undermine our sovereignty, abuse our trust, invade our homes, invade our privacy, destroy our property, hijack our bank accounts, and generally render itself above the law.

Then again, this is all par for the course from a militaristic government that is armed to the teeth, wages war against its own people, imprisons its citizens for profit, marches in lockstep with the corporate elite, and treats human beings as little more than cattle to be branded, bought, sold and butchered.

The following incidents constitute a typical week in the life of the American police state.

Not content with merely spying on our emails and phone calls, the NSA wants to spy on thermostats, refrigerators, and pacemakers.

Reinforcing fears about how easily surveillance technology can be abused by government officials, local police in California are using money acquired through asset forfeiture to buy surveillance equipment that was then used to blackmail city council members.

Small-town police departments continue to militarize their forces, acquiring military equipment such as BearCat armored vehicles and SWAT teams at an alarming rate.

According to the Government Accountability Office, the majority of people in the government’s criminal face-recognition database have never committed a crime.

The private prison business is booming, signaling a profitable windfall for investors and a death knell for any American unfortunate enough to run afoul of the many laws criminalizing otherwise legitimate behavior such as growing a garden on one’s front lawn or hosting a Bible study in one’s backyard.

In fact, one Florida couple recently sued their town council after being threatened with fines under a law banning front-yard gardens.

The Second Circuit Court of Appeals recently ruled that as long as the government shows “good faith,” it can search your digital files as much as it wants.

The FBI and other government agencies have been hiding cameras in city utility poles in order to carry out warrantless, covert surveillance on Americans.

The USDA and EPA have been using SWAT teams to conduct raids on raw milk producers, beekeepers and lemon growers, among others.

The Eighth Circuit Court of Appeals has ruled that Americans have no expectation of privacy when it comes to credit card magnetic strips. Translation: swiping a credit card to determine its legitimacy is not a search under the Fourth Amendment.

Sex scandals involving police officers—the latest involving police and sex workers in California—are revealing yet another sordid side of the abuses being perpetrated by government officials as they carry out their “official” duties.

The University of Oklahoma is preparing to launch a 24/7 hotline for students to report incidents of microaggressions and bias.

The government’s active shooter, crisis actor terror drills continue to blur the line between what is real and staged. In Fenway Park, a multi-agency counterterrorism exercise managed to fool even local media with its simulated explosions and gunfire, reports of active shooters and bombs, bomb-sniffing dogs, and fake victims, blood smeared on their faces, running from the park with hands in the air.

The Drug Enforcement Administration is fighting for warrantless access to Americans’ private medical files, including what prescriptions you might be on, as part of its so-called war on drugs.

Two police training academies have been suspended for what appears to be teaching the use of excessive force.

Belying its claims of neutrality, among the 426 organizations the IRS has been accused of targeting for increased scrutiny, a large subsection of the groups have the word “tea” in their name, 33 have “patriot,” 26 refer to “liberty,” and several others have “occupy” in their name.

The FBI is pushing Congress for access to Internet browser history without a warrant. The agency also wants to keep its biometric database secret and exempt from privacy laws.

Using video analytics technology that can detect “suspicious” behavior, the government is looking to tap into surveillance cameras in order to identify “people and objects who could present a threat, or individuals and items that might have been involved in a past crime.”

According to recent figures, people with severe untreated mental illness are 16 times more likely to be killed in a police encounter.

Michigan is creating a pilot program to allow police to carry out roadside drug testing, opening the door to further forced searches in violation of a driver’s right to bodily integrity.

If a new tech start-up gets its way, landlords and employers will eventually be able to strip-mine intimate data from your Facebook page, including entire conversation threads and private messages.

Facebook may also be listening in on your phone conversations all of the time.

According to EPA data, drinking water sources in communities across America may be contaminated beyond what is being reported.

Despite government efforts to appear transparent and receptive to input on its drone programs, secret documents reveal that the government’s secret drone task force ignored public concerns about drone surveillance.

Taking the risk of government surveillance to all-new levels and moving us that much closer to realizing the fictional world of Minority Report, “biohackers” are putting microchips and magnets in their bodies to enable them to communicate electronically with their surroundings.

Further legitimizing corrupt asset forfeiture schemes, the Texas Supreme Court has ruled that law enforcement can seize private property that was used in the commission of a crime, even if evidence of wrongdoing was illegally obtained by police.

Despite a mounting body of evidence—and dead bodies—proving that tasers can kill, police officers continue to use the so-called nonlethal weapons recklessly, leaving those victims who survive the shock permanently disabled.

As a testament to the transformation of the nation’s public schools into quasi-prisons, more than 1.6 million high school students now attend schools with police on campus but not a single guidance counselor.

In Oklahoma, highway patrols are rolling out a new asset forfeiture program that allows them to access and transfer any funds on prepaid credit cards directly to police bank accounts.

Finally, in a recent interview, former congressman Ron Paul voiced what so many of us have  been warning for years now: we no longer really have democracy in America.

Rather, as I point out in my book Battlefield America: The War on the American People, what we have is a political distraction that keeps us oblivious to the steady advance of the police state, deaf to the cries of its victims, blind to the damage its wreaking on our communities and silent in the face of tyranny.

As always, I am asked: what can Americans do about the incessant assault on their freedoms?

For starters, wake up. Stop allowing yourselves to be easily distracted by pointless political spectacles and pay attention to what’s really going on in the country.

The real battle in 2016 for control of this nation is not being waged between Republicans and Democrats in the ballot box. The real battle for control of this nation is taking place on roadsides, in police cars, on witness stands, over phone lines, in government offices, in corporate offices, in public school hallways and classrooms, in parks and city council meetings.

Wake up, America. The real battle between freedom and tyranny is taking place right in front of our eyes, if we would only open them.