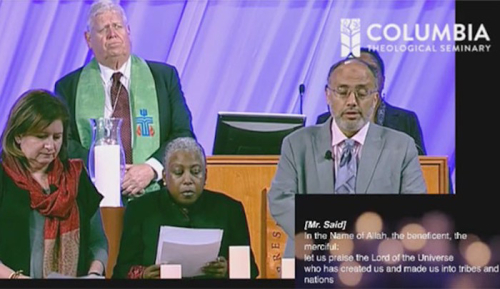 The assembled Presbyterians no doubt thought they were being wonderfully open-minded and ecumenical; they did not realize that Wajidi Said was openly proselytizing for Islam. “Lead us on the straight path” is straight from the Fatihah, the Opening, the Qur’an’s first chapter and the most common and oft-repeated prayer in Islam. Islamic scholars identify the straight path with Islam itself.

And in invoking “Abraham, Ishmael, Isaac, Moses, Jesus and Muhammad,” Said sounded beautifully ecumenical himself to the ranked Presbyterians, aglow in their bloomin’ primness, but in reality he was reflecting the Islamic belief that those figures and the other Biblical prophets all actually taught Islam, but their messages were corrupted by their followers to create Judaism and Christianity.

Said’s statement: “The creator of the universe, the most merciful, the most compassionate and the Lord of the universe who has created us and made us into nations and tribes, from male and females that we may know each other, not that we might despise each other, or may despise each other,” is based on the Qur’an: “O mankind, indeed We have created you from male and female and made you peoples and tribes that you may know one another. Indeed, the most noble of you in the sight of Allah is the most righteous of you. Indeed, Allah is Knowing and Acquainted.” (49:13)

He was calling the Presbyterians to Islam. And they were eagerly receptive, of course, not wanting to appear “Islamophobic.” This is what “dialogue” is all about for Islamic supremacists: proselytizing. But Christian leaders cannot and will not grasp that point.

“Allah bless us and bless our families and bless our Lord. Lead us on the straight path – the path of all the prophets: Abraham, Ishmael, Isaac, Moses, Jesus and Muhammad,” and so went the prayer offered up by Wajidi Said, from the Portland Muslim Community, as part of the “first order of business” during the opening plenary session of the 222nd General Assembly of the Presbyterian Church (USA).

Wajidi was taking part in the assembly’s scheduled time of remembrance for those killed in the recent Orlando terrorist attack and those killed last year in the shooting at the Emanuel African Methodist Episcopal Church in downtown Charleston, S.C.

“In the days leading up to this assembly we all know that our nation’s peace has once again been ripped apart by an act of mass violence,” said Heath Rada, moderator of the 221st General Assembly, when introducing it.

The violence, he said, “tore at each of our hearts as it reminded us of too many tragedies and too many victims. We are all touched by the tragedy of violence in some way. Being from North Carolina, I am reminded of the Chapel Hill shooting of Muslims, and I am concerned of course as I recognize that yesterday was the one-year anniversary of the shootings at AME church in Charleston.”

That shooting of Muslims was by a psychopath who was anything but an “Islamophobe.” Note how Said grasps for victimhood status.

By Illinois ReviewIn another blow to Illinois Gov. JB...
Previous article
Which One Are You: Ideologue or Pragmatist?
Next article
The state of patriotism in America