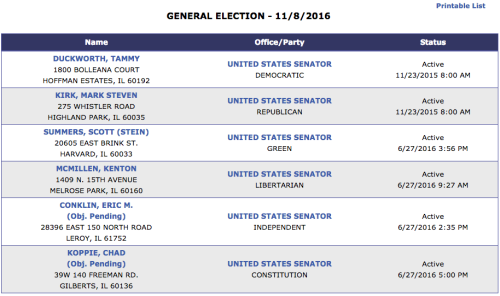 SPRINGFIELD – There's currently six names on the November 8th ballot for U.S. Senate on Illinois' General Election, but unnoticed to many is a State Board of Elections' furor to oust two of those names – Independent Eric Conklin of Leroy Illinois and Constitution Party candidate Chad Koppie of Gilberts Illinois.

Getting rid of Conklin and Koppie would shrink the alternatives Illinois conservatives would have to pick from. Conservatives are unhappy with both Democrat Tammy Duckworth and Republican Mark Kirk.

Bigger, who was once Stark County's board chairman, operates a State Farm insurance branch in the 18th District. But he also gets nearly $50,000 a year from Illinois taxpayers, thanks to Governor Rauner appointment to the state's Human Rights Commission. He also serves as Republican State Central Committeeman for the 18th CD, and was once again chairman of this year's IL GOP's platform committee.

Bigger's name is listed as objecting to Conklin and Koppie's petitions, and a decision from the State Board of Elections is pending.

Rob Sherman, who has run for office as a member of the Green Party, has listed objections to the same two candidates' petitions.

The only candidate sure to be on Illinois' November 8th ballot for U.S. Senate are Kirk, Duckworth, Green Party's Summers and Libertarian Kenton McMillen.