Rhoads: What Do Voters Really Know? 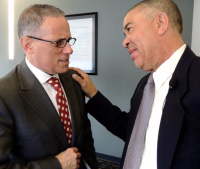 In November of 2008 2000, some analysts were surprised by a University of Michigan survey that seemed to find that a majority of voters thought that Republicans controlled both houses of Congress when in fact Democrats had held the majority in both houses for the previous two years.

So why did people think Republicans had the majority when it was not true?  Apparently many people thought that Congress must be controlled by the same party as the president and they were pretty sure that President George W. Bush was labeled as a Republican.

Most people who read political blogs like this one, have a high political IQ and they usually know which party controls each house in Congress and the state legislature.

But you might be surprised to find out how many of your neighbors do not know something as basic as the party affiliation of their own member of Congress.

Suppose your neighbor said, "I strongly disapprove of the job Congress is doing but my Congressman is different."  Why?  "Well Congressman Smith gave a flag that flew over the Capitol to my son's Cub Scout troop.  He sends me his newsletter and he spoke at our town's Memorial Day ceremony. His staff helped Aunt Jane get her social security disability check.  He is a great guy."

If you are a precinct committeeman in downstate Illinois or a precinct captain in Cook County, try a survey of voters in your precinct to find out if they really know for sure the party ID of their own member of the U.S. House.  I think you might be surprised to find out how little voters really know.

By Illinois ReviewIn a Facebook post on Tuesday, former...
Previous article
Reeder: Plagiarism may no longer be a big deal, but it’s still stealing
Next article
UPDATE X1: IPA confirms PAC-linked newspapers neither requested nor qualified for membership