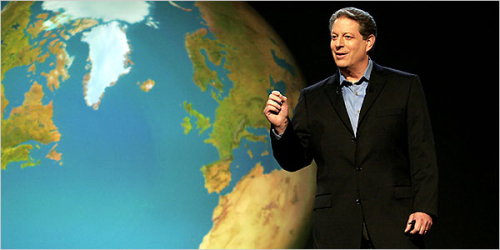 This year marks the 10th anniversary of Al Gore’s Oscar-winning documentary, An Inconvenient Truth. The documentary was a critical and box-office success here in the U.S., but not so much in the U.K. In 2007 a High Court ruling in Great Britain found that Gore’s documentary on climate change contained key scientific errors and breached education law, making it unacceptable for viewing by students. “Representing partisan political views,” the film could only legally be shown if accompanied by a warning about political indoctrination.

After the film’s debut, public’s awareness about global warming increased and the “green” movement surged. Since then, many corporations have gotten on board the Global Warming Band Wagon to exploit and profit from what has now become (falsely) an indisputable fact to many Americans: The Earth is dangerously warming and man is to blame. Climate alarmists warn that unless drastic steps are taken to curb global warming, Mother Earth will suffer grave consequences 100 or so years into the future. This despite a recent article that reports how tens of thousands of scientists have declared that human-driven global climate change is a hoax. Joe Bast, president of The Heartland Institute, opened the program with a brief historical account of the organization. Heartland was co-founded by Joe Bast in 1984 and was located in downtown Chicago until about 14 months ago, when its headquarters moved to Arlington Heights. In sync with informing attendees that the anticipated Denning-Lehr debate would deal with the causes and consequences of global warming, Mr. Bast promoted a Heartland book that was for sale at the event and can also be purchased at this site, Why Scientists Disagree About Global Warming.

Bast related how Denning has debated twice before when invited to attend Heartland’s International Conferences Climate Change. Few individuals have the courage to accept invitations to debate because their views about global warming don’t generally reflect those held by conference attendees, nor are they compatible with the views advanced by The Heartland Institute in its many published scientific journals and publications.

Bast set forth the following debate rules: 1) Denning and Lehr would each receive time for a 5-minute initial presentation. 2) After the five minute presentations, six film clips would be shown on screen from An Inconvenient Truth and be evaluated for validity and substance. 3) Following the evaluation of the six film clips, Denning and Lehr would be given five minutes to clarify or add to their argument positions. 4) A question and answer session would end the program.

Initial Presentations by Denning and Lehr

Professor Denning had mixed feeling about the 10-year-old documentary and was surprised that the movie was not exactly as he had remembered it to be when viewing again in preparation for his Heartland appearance. Although surprised that the film had aged fairly well, Denning said he disagreed with the film mostly on emphasis rather than the accuracy of the movie.

Denning said he prefers to talk about climate change through three words, which he labeled the “3 S’s of Climate Change”:

Lehr spoke of his 20-year connection with Heartland, and his debate against Denning on the same topic last February in the Colorado Senate. Lehr said about Al Gore and his movie: “Although the movie won an Academy Award, the award should have been for fear mongering.” About Al Gore and his narration: “He could have made an honest living as a moderator.” Regarding Global Warming: “The Earth has been warming since the 13th century, but the Earth stopped its warming 18 or 20 years ago.” In reference to an important aspect of global warming: “Five times more people die because of cold than because of heat.”

Lehr noted that carbon dioxide (CO2) is a wonderful thing. Plants love it. There is no evidence that man is altering the weather. What does impact the weather? Clouds impact the weather. And the sun is never given enough credit. Temperature can be measured through the carbon dating of ice cores which show temperature cycles ranging about 1,500 years in length. An increase in CO2 doesn’t cause warming, rather greater concentrations of CO2 in the atmosphere follows warming.

Film clip #1: Solar Radiation in the Form of Light Waves Passes Through the Atmosphere

Al Gore claims: Most of the outgoing infrared radiation is trapped by the thin layer of atmosphere that is being thickened by global warming “pollution,” so the atmosphere heats up.

Lehr: As indicated in the film clip, carbon dioxide does absorb some of the heat radiated back into the atmosphere by the earth. Water vapor absorbs 95 percent of it, but CO2 absorbs some, but only that which is in a wave length of 15 microns, which is like 10 to the minus 17 exponent. This measurement is extremely fine. The atmosphere is already saturated with the 15 micron wavelength of heat radiated from the earth, so any additional carbon dioxide will have no 15 micron wavelength to absorb.

The carbon dioxide in the atmosphere is 90 percent full of what it can absorb and 95 percent of greenhouse gas is water vapor of which 97 percent is contributed by oceans and decaying vegetation. Only 3 percent of global CO2 comes from man. For this tiny amount there is a push to change the economy of this world!

Film clip #2: The Coral Reefs Off the Coast of Australia Are Being Bleached and Destroyed Due to Global Warming

Lehr: There is nothing we can do about it. Bleaching is a natural outcome, and Lehr described concern about the Great Barrier Reef as fear mongering. Bleaching has occurred in a small portion of the reef, but an underwater survey of the 1,000 mile long reef shows that it is thriving; there is no more bleaching than was present 20 years ago.

Denning: Claimed that about one-third of the coral reef is now bleached, although Denning admitted that the biggest damage from global warming was not about the health of the coral reef but about a decline in the economy. According to Denning, replacing fossil fuels would reduce the Global GDP by 1 percent over the next few human generations. This is a far cry from the 25 percent reduction that he said economists estimate if 10 times more fossil is burnt than we burn today.

Part 2 will continue where Part 1 left off. Denning and Lehr debate the final four clips from Al Gore’s movie: 3) Melting ice will cause low-lying cities to disappear; 4) Polar bears are endangered because ice is their habitat; 4) Can this nation rise above itself and history to solve global warming?; 6) Global warming is casing rapid melting of ice on top Mt. Kilimanjaro in Africa.

By Illinois ReviewIllinois House Democrats maintain a comfortable supermajority...
Previous article
Ives: 17 Votes Later, and Your Property Taxes are still not frozen
Next article
Berg: Some workers are more equal than others