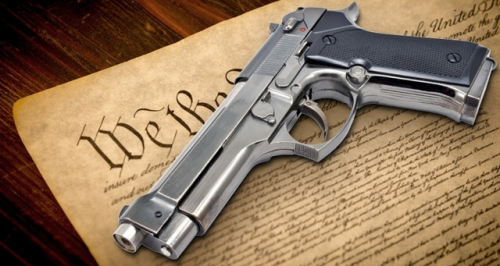 LAS VEGAS – During the last presidential debate between candidates Hillary Clinton and Donald Trump held Wednesday night in Las Vegas, debate moderator Chris Wallace of Fox News brought up the issue of the U.S. Supreme Court which led to a discussion on how the candidates interpret the Second Amendment.

The Second Amendment of the United States Constitution reads: "A well regulated Militia, being necessary to the security of a free State, the right of the people to keep and bear Arms, shall not be infringed.

Clinton and Trump's responses to Wallace question confirmed a dramatic contrast in their views as the transcript of the discussion below shows: WALLACE: We now have about 10 minutes for an open discussion. I want to focus on two issues that, in fact, by the justices that you name could end up changing the existing law of the land. First is one that you mentioned, Mr. Trump, and that is guns. Secretary Clinton, you said last year, let me quote, "The Supreme Court is wrong on the Second Amendment." And now, in fact, in the 2008 Heller case, the court ruled that there is a constitutional right to bear arms, but a right that is reasonably limited. Those were the words of the Judge Antonin Scalia who wrote the decision. What's wrong with that?

CLINTON: Well, first of all, I support the Second Amendment. I lived in Arkansas for 18 wonderful years. I represented upstate New York. I understand and respect the tradition of gun ownership. It goes back to the founding of our country. But I also believe that there can be and must be reasonable regulation. Because I support the Second Amendment doesn't mean that I want people who shouldn't have guns to be able to threaten you, kill you or members of your family. And so when Ithink about what we need to do, we have 33,000 people a year who die from guns. Ithink we need comprehensive background checks, need to close the online loophole, close the gun show loophole. There's other matters that I think are sensible that are the kind of reforms that would make a difference that are not in any way conflicting with the Second Amendment. You mentioned the Heller decision. And what I was saying that you referenced, Chris, was that I disagreed with the way the
court applied the Second Amendment in that case, because what the District of Columbia was trying to do was to protect toddlers from guns and so they wanted people with guns to safely store them. And the court didn't accept that reasonable regulation, but they've accepted many others. So I see no conflict between saving people's lives and defending the Second Amendment.

WALLACE: Let me bring Mr. Trump in here. The bipartisan Open Debate Coalition got millions of votes on questions to ask here, and this was, in fact, one of the top questions that they got. How will you ensure the Second Amendment is protected? You just heard Secretary Clinton's answer. Does she persuade you that, while you may disagree on regulation, that, in fact, she supports a Second Amendment right to bear arms?

WALLACE: Well, let me bring in Secretary Clinton. Were you extremely upset?

CLINTON: Well, I was upset because, unfortunately, dozens of toddlers injure themselves, even kill people with guns, because, unfortunately, not everyone who has loaded guns in their homes takes appropriate precautions.
But there's no doubt that I respect the Second Amendment, that I also believe there's an individual right to bear arms. That is not in conflict with sensible, commonsense regulation. And, you know, look, I understand that Donald's been strongly supported by the NRA. The gun lobby's on his side. They're running millions of dollars of ads against me. And I regret that, because what I would like to see is for people to come together and say: Of course we're going to protect and defend the Second Amendment. But we're going to do it in a way that tries to save some of these 33,000 lives that we lose every year.

WALLACE: Let me bring Mr. Trump back into this, because, in fact, you oppose any limits on assault weapons, any limits on high­ capacity magazines. You support a national right to carry law. Why, sir?

TRUMP: Well, let me just tell you before we go any further. In Chicago, which has the toughest gun laws in the United States, probably you could say by far, they have more gun violence than any other city. So we have the toughest laws, and you have tremendous gun violence. I am a very strong supporter of the Second Amendment. And I am ­­ I don't know if Hillary was saying it in a sarcastic manner, but I'm very proud to have the endorsement of the NRA. And it's the earliest endorsement they've ever given to anybody who ran for president. So I'm very honored by all of that. We are going to appoint justices ­­ this is the best way to help the Second Amendment. We are going to appoint justices that will feel very strongly about the Second Amendment, that will not do damage to the Second Amendment.