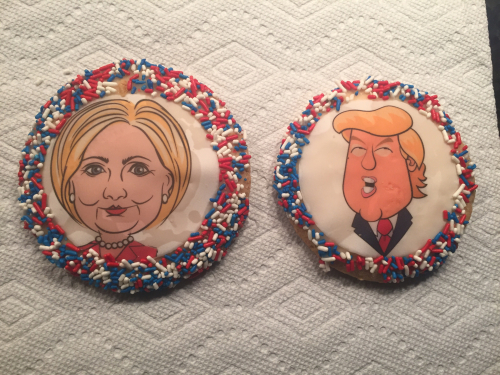 The media is obsessed with elections surveys, studies, and polls. I often question the legitimacy of these polls, along with who pays to promote them. With that I mind, I stopped by Bennison's Bakery on Davis Street in Evanston, Illinois to check on their presidential "cookie poll."

Bennison's are selling Hillary Clinton and Donald Trump sugar cookies for $2.50 each (plus tax) during the campaign season. Each sale is posted as a vote on a board behind the counter. As of Thursday, Clinton leads 1925 to Trump's 1235. My team of math experts tells me that is a 61% to 39% preference for Clinton. 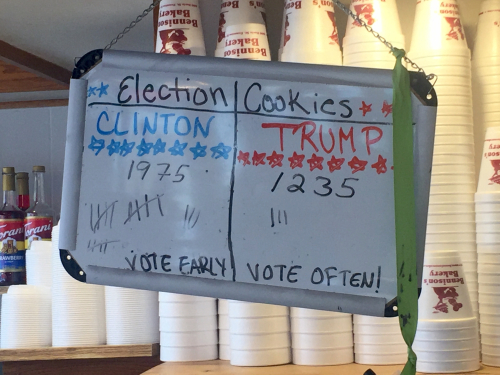 While Hillary appears to be winning in a landslide, some say this is good news for Donald. It is well known that Evanston leans heavily Democrat, so it appears he may benefit from significant crossover votes.

Governor Bruce Rauner was able to win Illinois by getting just over 20% of the Chicago vote, so 39% for Trump may be significant.  In full disclosure, I purchased a Trump cookie.

A lady next to me indicated the poll may be "rigged" as the Hillary cookie appeared bigger in size making it a better buy. I asked her which she was buying. She said, "Neither, I'm buying the Chicago Cubs Cookies and Cupcakes." I made a quick stop at Jewel  to find no political cookies but a huge number of Chicago Cubs treats and even a special Cubs red wine. As you know, the Cubbies are in a huge playoff run this year. I will be monitoring the cookie polling over next 19 days. Early voting is going on now with the general election on Tuesday November 8, 2016.