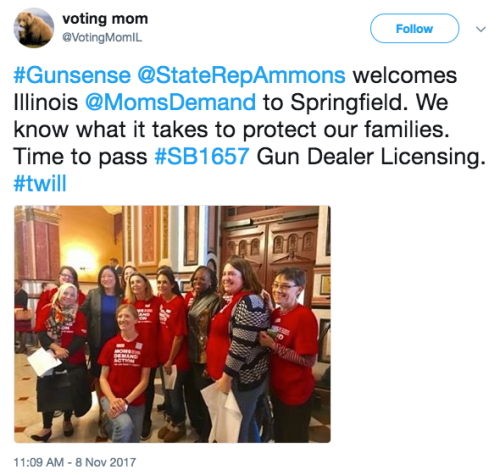 SPRINGFIELD – Busloads of gun control activists are converging at the State Capitol Wednesday, urging lawmakers to pass a "Gun Dealer Licensing Act" in light of gun violence around the nation.

SB 1657 would create onerous mandatory regulations, fees potentially in the thousands of dollars and excessive amounts of red tape that would almost assuredly force the closure of many firearm dealers, and prevent prospective owners from opening new ones," the NRA-ILRA website says.

But Wednesday, photos of moms headed on buses towards the Capitol flooded Twitter and Facebook – calling for the Democrat-controlled Illinois House to push through the measure to the governor's desk.

The Illinois Senate passed SB 1657 in a 30 to 21 vote in April 2017, with seven downstate Democrats registering an "NV" on the roll call. All Republicans except then-Minority Leader Christine Radogno opposed the measure. Radogno voted "Present."

The vote will need a 3/5 vote to pass the House during the veto session.