Will: In Illinois, a looming battle over the bankrupting ‘blue model’ 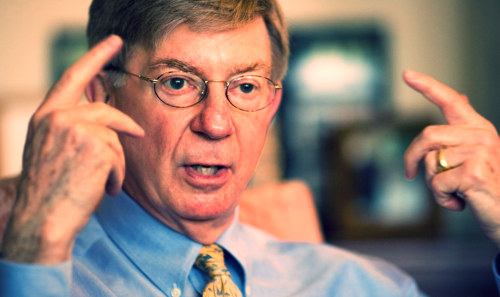 This state’s story, which lately has been depressing, soon will acquire a riveting new chapter. In 2018 Illinois will have the nation’s most important, expensive and strange election.

Its importance derives from this fact: Self-government has failed in the nation’s currently fifth-most populous state (Pennsylvania soon will pass it). Republican Gov. Bruce Rauner will seek re-election with a stark warning: The state is approaching a death spiral — departing people and businesses suppress growth; the legislature responds by raising taxes; the exodus accelerates.

Rauner, whose net worth earned as a private-equity executive is $500 million, give or take, probably will be running against someone six times richer. The race might consume $300 million — “maybe more,” Rauner says — eclipsing California’s $280 million gubernatorial race in 2010, when that state’s population was three times larger than Illinois’.

The strangeness of the contest between Rauner and the likely Democratic nominee (J.B. Pritzker, an heir to the Hyatt hotel fortune) is that Rauner’s real opponent is a Democrat who has been in the state assembly since Richard Nixon’s first term (1971) and has been speaker all but two years since Ronald Reagan’s first term (1983). Michael Madigan from Chicago is the “blue model” of government incarnate. This model is the iron alliance of the Democratic Party and government workers’ unions. Madigan supports Pritzker, who is committed to the alliance. This is the state of the state under it:

Unfunded state and local government retirement debt is more than $260 billion and rising. Unfunded pension liabilities for the nation’s highest-paid government workers (overtime starts at 37.5 hours) are $130 billion and are projected to increase for at least through the next decade. Nearly 25 percent of the state’s general funds go to retirees (many living in Texas and Florida). Vendors are owed $9.5 billion. Every five minutes the population — down 1.22 million in 16 years — declines as another person, and an average of $30,000 more in taxable income, flees the nation’s highest combined state and local taxes. Those leaving are earning $19,600 more than those moving in. The work force has shrunk by 97,000 this year. There has not been an honestly balanced budget — a constitutional requirement — since 2001. The latest tax increase, forced by the legislature to end a two-year budget impasse, will raise more than $4 billion, but another $1.7 billion deficit has already appeared.

The one Democrat who did not vote for Madigan for speaker this year says he’s since been bullied. Another Democratic legislator — an African-American from Chicago’s South Side, a supporter of school choice — broke ranks to give Rauner a victory on legislation requiring arbitration of an impasse with a 30,000-member union. Madigan enlisted Barack Obama to campaign against the heretic, who was purged. These were warnings to judges, who must face retention elections. They — including the one who refused to trigger arbitration by declaring a negotiation impasse — are, Rauner says, “part of the machine” in this “very collectivist state.” Thuggishness has been normalized: Because Rauner favors allowing municipalities to pass right-to-work laws that prohibit requiring workers to join a union, Madigan’s automatons passed a law (Rauner’s veto stood) stipulating up to a year in jail for local lawmakers who enact them.

In 2018, Rauner will try to enlist voters in the constructive demolition of the “blue model.” It is based on Madigan’s docile herd of incumbent legislators, who are entrenched by campaign funds from government unions. Through them government, sitting on both sides of the table, negotiates with itself to expand itself. Term limits for legislators, which a large majority of Illinoisans favor, would dismantle the wall. A 60 percent supermajority of the legislature is required for such a constitutional reform. So, next year voters will be urged to oppose any legislature candidate who will not pledge to vote to put term limits on the ballot. And all candidates will be asked how often they have voted for Madigan for speaker — he has a 26 percent approval rating — and to pledge not to sin again.

“I love a fight,” says an ebullient Rauner, whose rhetoric cannot get much more pugnacious. He calls Madigan “the worst elected official in the country” and Madigan’s machine “evil.” The nation has a huge stake in this brawl because the “blue model” is bankrupting cities and states from Connecticut to California, so its demolition here, where it has done the most damage, would be a wondrous story enhancing the nation’s glory.