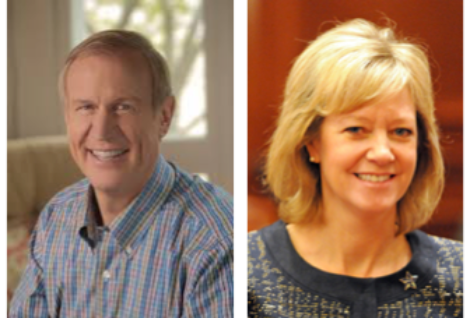 Ives strongly rejected Rauner's comments. “The reason Illinois families are ‘punished’ by the $10,000 cap on State and Local Tax Deductions is because the guy who ran on reform in 2014 didn’t do anything about Illinois’ tax burden. He actually made it worse.

Families in this state pay the highest property taxes in the nation, Ives said, and Governor Rauner did nothing about it.

"If Illinois put hard cap on property taxes, like Indiana, then more Illinois families would qualify to keep more of their income under House Republicans tax reform plan. Further, more of those same Illinois families could afford more home and expect a real rate of return on their investment," she said. "This prospect is virtually eliminated in Illinois where the median property tax rates as a percentage of home value is nearly 2.5 times that of Indiana."

Governor Rauner is talking about freezing property taxes, but that will not correct the situation, but could aggravate it, the state representative for Illinois' 42nd House District said.

"Again, Illinoisans pay the highest property taxes in the nation. Why would you want to lock that in by freezing them? We need to lower property taxes," Ives said. She has proposed a property tax cap that will force state government to remove itself from initiatives it has proven poor at managing, and to properly fund K-12 education.

According to the left-leaning Tax Policy Center, 80% of American families will see federal tax relief from the GOP tax cuts.

"Rauner is simply trying to out-#NeverTrump J.B. Pritzker. In substance and in rhetoric, Rauner is once again allied with Rahm, Pelosi and Schumer and against the Illinois GOP congressional delegation and Illinois GOP families. Another betrayal," Ives said.

Ives then contrasted Rauner with the President.

“The truth is, Governor Rauner failed to hold the Illinois Republican caucus together, and 15 Republicans voted to inflict a massive income tax hike on the already struggling families and businesses of this state," Ives said. "In Washington D.C., President Trump unified the Congressional Republican caucus to pass tax reform that will provide relief to most Americans. I may not agree with everything President Trump does, but I do want to see him succeed. Bruce Rauner is out trying to sell a success as failure, and failure as success. It is little wonder Illinois Republicans can feel they can no longer trust the man they elected in 2014.”