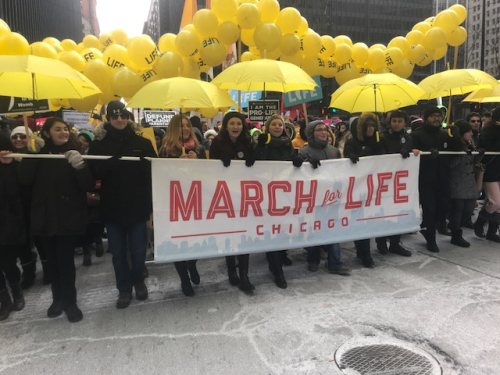 By Nancy Thorner with photos by Mark Weyermuller -

The writer’s participation in March for Life Chicago, January 14th, 2018, began when she boarded a Midwest bus that departed from Marytown, 1600 W. Park Ave., Libertyville, Illinois, which was arranged by the Lake  County Right to Life. Bonnie Quirke is president of the Lake County Right to Life.

Boarding the 55-seat deluxe passenger bus were folks from nearby Lakewood Presbyterian Church PCA, all eager to experience the joy and the excitement upon reaching the site of the rally at Federal Plaza, 50 W. Adams St., Chicago, IL. There those on the bus joined the estimated 6,000 participants that had gathered by the start of the 2:00 p.m. rally, which included people of all ages braving the below-freezing weather to decry abortion.

Before joining other anti-abortion supporters who were already assembled in Federal Plaza from all across the Midwest, it was with sadness that we had to first walk past a rather small gathering of pro-abortion (baby killers), who let us know they did not respect life or its sanctity before we could cross over the street to Federal Plaza. Finding a place near the erected stage for the occasion in Federal Plaza, my group of participants had a good view of the fine speakers selected to inform and to set the mood for the jubilant pro-life march that was to follow, where participants from all walks of life had one thing in common, as expressed by March for Life Chicago Board of Directors President Dawn Fitzpatrick, “Knowing that Love Saves Lives" — the theme of this year's March for Life — "and that abortion is one of our culture's gravest ill."

Every speaker had uplifting and important remarks to share with the assembled 6,000 participants.  Check here to see a listing of featured speakers. Although not listed as one of the official speaker, Republican State Representative Jeanne Ives, now challenging incumbent Republican governor Bruce Rauner in the Illinois Primary election on March 15, 2018, was greeted with much enthusiasm as she focused on the large number of assembled young adults and teenagers. Notable is that Jeanne Ives's niece and 17 others from South Dakota came to join and support Ives, who hails originally from Vermilion, South Dakota.All participated in the post-rally march. Video here: http://illinoisreview.typepad.com/illinoisreview/2018/01/ives-at-march-for-life-2018-your-political-leaders-have-betrayed-you-video.html

Another legislator of note to speak was Republican congressman Peter Roskam, who spoke of the legacy left by Henry Hyde, who because of his strong faith was the motivation behind the long standing federal protections against abortion as provided by the Hyde Amendment. Pat McCaskey, co-owner of the Chicago Bears, was well received having been a regular attendee at Chicago's March for Life over the event's 13-year history, which was patterned after the National March for Life that has been taking place in Washington, D.C., since 1974. McCaskey warmed up the crowd with a short, clever poetic ode addressed to all his March for Life friends.  Emphasized was how God shows us the way. That is "to follow natural life from conception to natural death."  McCaskey mused that given science that has proven that a fetus is not just a piece of tissue, how after 45 year of legal abortion, abortion would have decreased with a realization that every life has an intended dignity.

I was impressed by what Pastor Ed Stetzer had to say, Interim Teaching Pastor at Moody Church and Executive Director of the Billy Graham Center at Wheaton College, who pronounced that "We must speak for those who cannot, because they cannot speak for themselves."

Cardinal Blasé J. Cupich, Archbishop of Chicago, also spoke representing Catholics throughout Chicago.  Cardinal Cupich lamented  upon how abortion denies lives and dreams from being realized; however, in reflecting upon the large attendance, Cupich then commented, "We have not and have not grown weak after 45 years of legalized abortion."  Cupich then suggested that there was far better use of taxpayer money here in Illinois than to fund abortions.  In closing Cupich proclaimed us as the "Magi of our time." Following the last speaker, it was time for the march to begin.  Participants walked proudly and joyfully with signs held high through the downtown area of Chicago, several blocks long in length, before returning to the Federal Plaza with wonderful memories to take back home with them, hopefully with a renewed and fervent desire to further share with others in their communities and with their state and federal representatives that "we love life because it changes lives."

Leading the march were the bright yellow-clad Crusaders for Life group under a cloud of yellow balloons imprinted with large black letters spelling out LIFE.  Also impressive was the music provided by the Carmel High School Marching Drum Band from Mundelein High School, IL.

Next Monday is the 45th anniversary of the Roe vs Wade decision legalizing abortion in January 2:, 1973.  The National March For Life is Friday, January 19, 2018 in Washington’s DC.  President Donald Trump has just announced he will address the March for Life via live stream on Friday becoming the president to do so. More information at http://marchforlife.org/march-life-2018/rally-march-info/