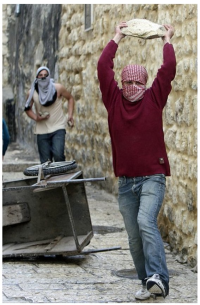 Today, in lieu of a normal column, would you mind if we just set a few things straight?

There are issues in which a combination of forces – from conscious choices by politicians and academics to sheer ignorance by reporters and vocal but confused stars in the popular culture – have combined to cause complete misunderstandings across the country, and even across the world.

In his great speech endorsing Senator Goldwater in 1964, “A Time for Choosing,” (commonly known simply as The Speech), President Ronald Reagan first made a statement that has long resonated with those of us who watch the media. President Reagan put it this way:  “The trouble with our liberal friends is not that they are ignorant, but that they know so much that isn’t so!”

This is truer today than ever before, as we can tell by just considering a few subjects, and comparing the truth with the way these issues are commonly presented and usually believed by a misled public.  As an example, let's look at Israel, and at how stories about that tiny, friendly country are written… and at the little biases that are so often built into coverage.

We hear all the time about “giving the two-state solution a try.” It’s already been done.  When the British Mandate for Palestine was given independence in 1948, it was split in two:  the lion’s share of the land became the Kingdom of Trans-Jordan, now simply known as Jordan, and the western fraction of it became Israel.  Jordan was to be the nation for the Palestinian muslims, and Israel was to be the homeland for Jews.

So, when people say they believe in a two-state solution, they’re lying to you; it’s already in place. In fact, they’re really calling for a three-state solution, by splitting up tiny Israel yet again.  And if they get that, we all know what will happen next: they’ll call for splitting it up again.  Interesting how the land for these splits always has to come from tiny Israel, isn’t it?

Ever hear about an area being referred to as “the occupied territories,” or “the West Bank?” In five thousand years of human history in that area, nobody referred to this area by these names until the last 50 years.  In fact, they have been known – for thousands of years – as Judea and Samaria… Judea being the southern of the two, and Samaria being the northern.    While precise national borders have naturally changed over the centuries, these two regions have always been part of the area traditionally thought of as Israel.

The terms “West Bank” and “Occupied Territories” are modern, politically-driven terms, used because the real names, Judea and Samaria, don’t fit the arabist narrative. But think about it, and be fair:  If you call a place Judea, it’s pretty obvious that it should be thought of as Jewish, right?  So the enemies of the Jews change the name… in an attempt (sadly, often successful) to weaken the case of Israel in the public mind.

When we Americans think of the term “throwing rocks,” we imagine a scene from a Mark Twain novel or a similar image of pure Americana: young Huck and Tom standing on a riverbank, skimming flat stones across the surface of the river on a lazy summer day.  The connotation is utterly harmless, isn’t it?

Well, for decades now, so-called “palestinian” arabs – the violent activists of the PLO/Hamas/Fatah brand – have harassed and attacked Israeli soldiers and police, Israeli civilians, and tourists from all over the world, in a particularly gruesome way: they stand on rooftops or climb up to the tops of walls or fences, and pitch 20, 30, even 50-pound chunks of concrete down onto the heads of passersby.  This rainstorm of bricks and concrete chunks can break a shoulder or arm, it can obviously even kill if they land on a person’s head (and yes, they sometimes do).  And the “palestinians” do this all the time.  But how is it reported?

Well, now you know what the press means when they report that these demons “threw rocks.” Despite the impression intentionally given by reporters and the politicians on the side of the terrorists, we’re not talking about pebbles here.

For as long as the modern state of Israel has been a nation again, its opponents have accused it of being prejudiced against muslims… often even going so far as to declare the Israeli government to be guilty of a South Africa style “apartheid” – the concept of having different classes of legal protections depending on ethnicity or religion.

That would hardly be possible if Israel practiced apartheid.

The arabists – or anti-Israel activists (it’s difficult to find a perfect term for Israel’s opponents in the world) – focus much of their ire on the fact that Israel refuses to give full “right of return” to the many so-called “palestinians” – the population of non-Israeli arabs and their descendants who currently live in Gaza and the “palestinian” portions of  Judea and Samaria.

But who are these people?

Well, when Israel gained her independence in 1948, remember, there were people living all over the old British Mandate for Palestine, as the line was drawn and it was split in two. It would have been logical to assume that the residents of each part would stay put, populating the two countries neatly with those who were there already.

Sure enough, those who remained in Israel (Jews, Christians, Druze, muslim, atheist, etc.) became Israeli citizens, and their heirs retain full citizenship, regardless of ethnicity or religion.

But many of the arab muslims left as soon as the lines were drawn, and fought alongside Israel’s enemies in the 1948 war.

When Israel successfully defeated the attackers, those arab countries obviously should have welcomed those who left Israel to side with them – as they had promised – but they did not. Egypt, Syria, Jordan, etc. spurned these allies, leaving them without a country.

The arab nations of that region felt – at the time – that these refugees would serve their political cause better as starving, homeless victims… and they knew that if they crafted the message right, and gained the support of the media, they would succeed in shifting the blame to Israel. They were right.

The so-called “palestinians” – those who fought against Israel at its inception and joined with the neighboring arab belligerents, and their heirs – certainly do have a legitimate gripe against somebody. They’ve raised their children and grandchildren in poverty, violence and despair for generations.  They have a right to be bitter.

But against whom? Not Israel.  Israel can certainly not be blamed for the faithlessness of its arab neighbors against their own allies.  And Israel can hardly be expected to welcome in such people into their own tiny country, knowing they’ve spent generations raising their children to hate Israel and to curse its very existence.

In fact, the so-called “palestinians” have every right to be furious at the arab world, which has treated them as a punching bag and a political tool for over half a century now.

But there’s not much chance those one-time allies will ever do anything for them… even though they should. So what’s left to do?

Israel has capitulated before, maybe they’ll capitulate again. So even though the refugees’ case against Israel grows weaker by the year, they don’t relent.

And who looks bad, for no good reason at all?

But only because of the willful deception practiced by politicians, academics and media, all over the world.

It is high time the world fought back – on this and on so many issues – and started demanding that only truths be told.

John F. Di Leo is a Chicagoland-based international trade compliance trainer, writer and actor. A county chairman of the Milwaukee County Republican Party in the 1990s and a president of the Chicagoland-based Ethnic American Council in the 1980s, he has been a recovering politician now for over 20 years.