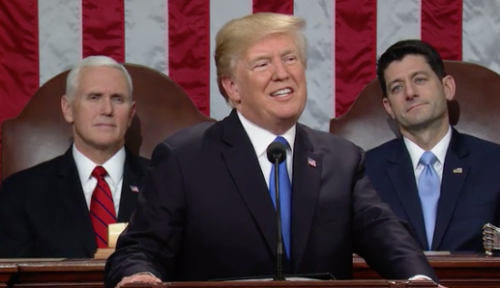 “Here's what we found out. 48 percent of those who watched the speech tonight had a very positive reaction to the speech. 22 percent, somewhat positive,” Chalian said.

That means according to CNN’s own findings, 70 percent of those who watched the speech had some sort of positive reaction and less than 30 percent hated it.

The first member of the Illinois congressional delegation to send out an immediate response was Congressman Mike Bost (IL-13):

“I appreciate President Trump using his address to highlight some of the work he and Congress are pursuing to empower America’s families and job creators. Particularly important to Southern Illinois has been the new tax reform law that will give hardworking families more money in their pockets to spend on a child’s education, growing a small business, or saving for the years ahead," Bost said.

"But we still have plenty of work to do, starting with fixing our broken immigration system and bringing our crumbling infrastructure into the 21st Century. I am committed to finding common ground with anyone, Republican or Democrat, to build a bright future for Southern Illinoisans.”

On the Democrat side of the aisle, Congressman Luis Gutierrez was spotted wearing a button in support of the Left's #MeToo movement, a butterfly pin in support of the Dreamers and a shawl recognizing the African countries offended by Trump's alleged "sh##hole" comment about impoverished countries. Before the end of the speech, when the Republican aisle was chanting "USA! USA!" Gutierrez got up and walked out. (His spokesperson said later the congressman left to get to a Univision interview)

Even though I disagreed with almost everything he said, for Trump, the speech was clear and well-delivered.  Whoever translated it for him from Russian did a good job.

I am still hopeful, but I don’t see this Congress and this President coming to an agreement that prevents the deportation of the Dreamers.  The White House agenda is to gut legal immigration in exchange for allowing some of the Dreamers to live here.  For those of us who support legal immigration, and that’s most Democrats and many Republicans, it won’t fly.  And the Dreamers themselves have said they do not want legal status if it comes at the expense of others who will suffer more as part of the bargain.  The speech did nothing to bring the pro- and anti-immigrant sides closer together.

I was born in 1953 in the U.S. when separate but equal was the law of the land.  I am proud of the progress the United States has made as a nation on issues of race, gender, sexual orientation, disabilities, and many other areas where we have advanced.  I was hoping to get through my life without having to witness an outwardly, explicitly racist American President, but my luck ran out.

President Trump laid out a story of American success over the past year: a growing economy, more jobs for more Americans, higher wages and lower taxes for the middle class. Congress has worked hard to send legislation to the President’s desk that will benefit all Americans. My highlight of the evening was hosting a devoted American, Midshipman Alex Vandenberg of Sugar Grove, Illinois, who has excelled at the Naval Academy. I also enjoyed sitting with Rep. Brad Schneider, my colleague and a Democrat from Illinois. On issues like infrastructure, economic growth and more, I believe we can agree on many issues facing the nation. I am committed to working in a bipartisan way to create jobs, keep the economy growing, improve health care, build our infrastructure and protect Illinois families. And I look forward to working with President Trump and my colleagues in the House and Senate to get the job done.

As did Congressman Peter Roskam (IL-06):

“The past year has brought significant successes on a variety of issues. And while we’ve come far over the last year, there is still more work to be done. I am proud of what my colleagues and I in the House of Representatives have been able to accomplish throughout this past year – most significantly, creating and passing a transformational new tax system that modernizes an overly-complicated and out-of-date tax code, providing middle-income families real tax relief by letting them keep more of their money from every pay check and allowing businesses to prosper, grow and create more jobs across the country.

“There is a bipartisan, national consensus that our infrastructure needs to be updated and I believe that we can come together to make this happen in the interest of safety for American commuters across the nation.

“Working across the aisle, I believe that Congress can and will reach a bipartisan agreement on DACA that will protect Dreamers from deportation and provide much-needed increases in border security.

“Congress has worked with this Administration to strengthen and rebuild our military; bolster U.S. diplomacy to strengthen our alliances and isolate our enemies; and to support nations around the world seeking a democratic future. I am committed to working with my colleagues in Congress and all branches of government to continue these efforts and help make our world a safer, more secure place.

“The opioid epidemic is on the rise and hitting Sixth District families hard. As Chairman of the Ways and Means Health Subcommittee I am focused on stopping the spread of opioid abuse. I have supported legislation to combat this crisis and am committed to working with my colleagues to find a solution to this heartbreaking addiction that has destroyed so many lives.

“As we move forward into the coming year, I am optimistic about the goals we can accomplish working together for the American people.“