One particular question is especially important to Illinois, a state already likely to lose one Congressional seat due to Illinois' declining population. Asking residents whether or not they are citizens of the U.S. could cost Illinois a second seat, as those who haven't gone through the nation's immigration system to become legal citizens are likely to not respond, opponents say. That could cut the state's reported population dramatically.

Twenty years ago, the 2000 U.S. Census Long Form contained this question for every member of a household: 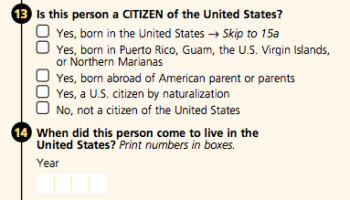 Wilbur Ross, U.S. Secretary of Commerce says the question should be included in 2020.

"The citizenship data provided to [Department of Justice] will be more accurate with the question than without it, which is of greater importance than any adverse effect that may result from people violating their legal duty to respond," he said in a statement.

A spokesperson from Governor Rauner's office said the question should be included because the governor believes "we should collect accurate citizenship data." Rauner, first elected in 2014, lost substantial support from the Republican Party base after signing into law a measure effectively making Illinois a sanctuary state.

Illinois Attorney General Lisa Madigan says she will join a lawsuit with other states opposing the citizenship question. "We  must encourage every person in our country to participate, instead of putting up barriers to prevent people from being counted," she said.

The US Constitution emphasized "persons" be counted, and doesn't mention"citizens," opponents argue. Article 14, Sec. 2 of the U.S. Constitution says "Representatives shall be approtioned among the several states according to their respective numbers, county the whole number of persons in each state."

Not only does the census count affect congressional representation, federal allocations would diminish if there are more people than those reported in the survey every ten years.