Comey will be in Chicago April 20th promoting his book "A Higher Loyalty: Truth, Lies, and Leadership," in which he refers to President Trump as, among other things, similar to a mob boss. The New York Times says Comey's memories as recorded in the book are "persuasive."

The President is obviously not happy about Comey's accusations. He tweeted a two-part response Friday morning: 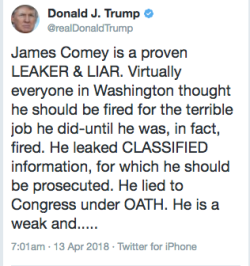 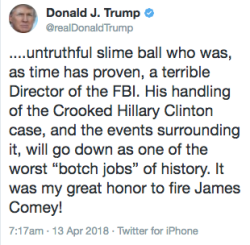 Comey will appear April 15th with ABC’s George Stephanopoulos – who was the Clintons' communications director. Comey will also appear on Leftist propaganda page“The Late Show with Stephen Colbert” on April 17 and “The View” on April 18.