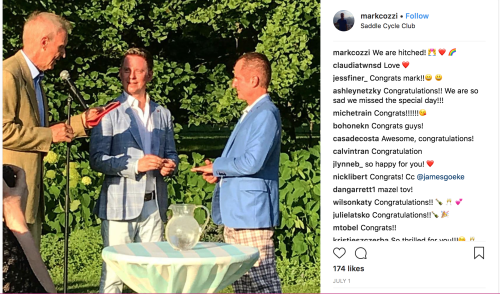 CHICAGO – An Instagram post of Illinois Governor Bruce Rauner appearing to officiate at the wedding of Equality Illinois board member Mark Cozzi and James Koeke on July 1st has been stirring interest for the past few days.

The photo is on newlywed Mark Cozzi's Instagram account, along with photos of him and his new husband on their honeymoon in Italy. While the governor's part in the ceremony as the photo indicates has not been clarified, it's obvious that Rauner is no longer hopeful of attracting social conservatives to help re-elect him in November.

"It's clear that the governor has learned nothing from his near-loss in the Republican primary this year," Illinois Family Institute's executive director David E. Smith told Illinois Review. "He's not interested in attracting social conservatives to get out and vote Republican this fall."

Having someone as important as the governor of a state oversee the exchange of wedding rings and marriage vows is impressive in itself. Not every couple has the clout to get such an influential person to oversee their wedding.

Indeed, the governor has appointed Mark Cozzi to two different state boards. In June 2017, Governor Rauner appointed Mr. Cozzi to serve on the State Universities Retirement System Board of Trustees, managing $20 billion of assets for the pension system.  There he serves as chairman of the Investment Committee.

For six years, Cozzi has been a commissioner on the Chicago Housing Authority. He also served 17 months on the Illinois State Board of Investment before joining the SURS Board of Trustees. He is  senior Managing Director for The Electrum Group.

Rauner isn't the only governor that has performed gay weddings – but he may be the only Republican that has thus far. Democrats Governor Cuomo of New York and Governor Terry McAuliffe of Virginia have performed weddings as well.

Rauner's public outreach to the gay community has stepped up over the last few months.  He and his wife Diana attended a reception before the Chicago Pride March in June this year, and he marched in Aurora's first Gay Pride Parade the same month.

The governor has chosen to snub the Illinois Republican Party social conservative base despite being faced with near-mutiny when he almost lost the 2018 Republican Primary to conservative State Rep. Jeanne Ives in March.

Governor Rauner's campaign contact Alex Browning has yet to respond to IR's query about the photo and the event.  It is unknown how many weddings the governor has participated in during his first term.