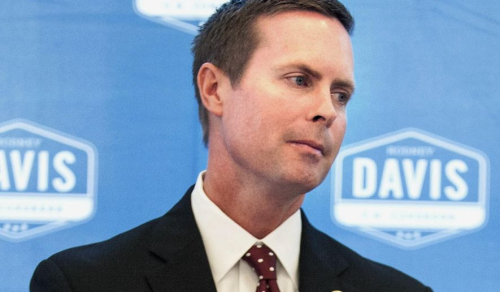 Republican Congressman Rodney Davis (IL-13) sent out a press release Friday, boasting of now 10 unions that are backing his re-election in November.

Taylorville, IL – Ahead of Labor Day, four more unions have announced their support for Rodney Davis. The United Association of Journeymen and Apprentices of the Plumbing and Pipe Fitting Industry, National Association of Letter Carriers (NALC), National Air Traffic Controllers Association (NATCA), and the Associated Fire Fighters of Illinois (AFFI) have all decided that they will back Davis for re-election. In June, six unions endorsed Davis.

While Davis did not provide a direct quote in the press release, his spokesman Ashley Phelps pointed to Davis' support of unions and union-favored issues like Project Labor Agreements – issues Republicans have typically opposed over the years.

“Rodney’s support from unions continues to grow because the hardworking men and women in this district know he has their back. He has continuously supported them on pro-labor issues, like Davis-Bacon and Project Labor Agreements (PLAs) and fought back against anti-union attacks from some in his own party. He has a proven record of standing with the workers of this district,” said Davis Spokesman Ashley Phelps.

Friday's press release then listed quotes from leaders of four unions announcing their endorsement before the Labor Day weekend:

“Since being elected to the U.S House of Representatives, Congressman Davis has had the back of Illinois working families and the members of the United Association. Whether he was leading the effort to defeat anti-union legislation to prohibit Project Labor Agreements on construction projects or providing relief to union welders from government over regulation; his support for our issues has not wavered.” – United Association of Journeymen and Apprentices of the Plumbing and Pipe Fitting Industry

“Throughout your tenure in Congress, you have always had an open door and open mind when it comes to issues of importance to letter carriers in the State of Illinois. You have been willing to use your influential voice within your caucus to protect the interests of labor, most recently opposing privatization of the United States Postal Service and Tribal Labor Sovereignty legislation that would have stripped hundreds of thousands of workers of worker protections.” – National Association of Letter Carriers (NALC)

“Time and time again he has worked on NATCA’s behalf to protect the collective bargaining, due process, and employee rights of our members. The state of Illinois has been fortunate to have strong advocates in U.S. Congress when it comes to aviation issues, and Congressman Davis has continued in that tradition.” – National Air Traffic Controllers Association (NATCA)

“The Associated Fire Fighters of Illinois (AFFI) represents over 15,000 professional firefighters in 225 communities across the State. The political arm of our organization, the AFFI Political Action Committee, met recently and considered the voting record of incumbent legislators as well as questionnaire and interview results of new candidates. Your support of issues affecting professional firefighters in Illinois earned you this endorsement.” – Associated Fire Fighters of Illinois (AFFI)