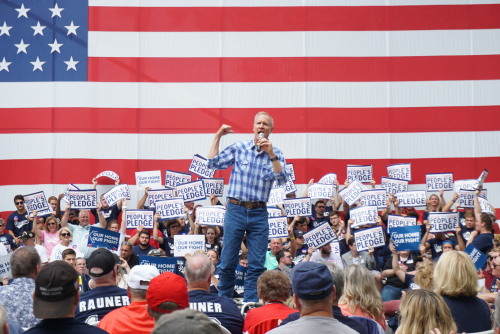 SPRINGFIELD – Wednesday, Governor Rauner spoke to supporters at the Governor's Day rally at the State Fair. He focused on the need for lower taxes, more jobs, and ending corruption. His speech highlights the clear distinction between him and Madigan's handpicked candidate JB Pritzker, his campaign office said in a press release distributed after the speech.

Some excerpts from the governor's speech:

Every election is important. This one is the most important election of my lifetime. I've lived in Illinois since 1956, the year I was born. 62 years, I don't know of a more important election than this one. Everything is on the line, everything. The fundamental question: can we continue to fight back and break the stranglehold the Madigan Machine has had on our state? Can we break that lock hold and grow jobs, cut taxes, get term limits, end the corruption. Can we really continue on the battle to restore our state or will we fall backwards? Will we fall backwards? No. We are not going to fall backwards, we're not. We cannot let Madigan and Pritzker get total control of this state. That is going to mean more taxes, more corruption, more job losses, and a devastating future for our children and our grandchildren in the state of Illinois. We can't let that happen. We cannot let that happen. And this is the key time.

The distinction couldn't be more stark. There is such a stark distinction, a simple choice, for the people of Illinois. And the reason we're going to win is our message is a unified message. Democrats want lower property taxes. Democrats want term limits. Honest Democrats not loyal to the Machine want the same changes that we do.

…Pritzker and Madigan will continue the regime of regulations and punishing red tape, pushing job creators out of this state. I will fight them, cut the red tape, cut the regulations like we've been doing. We've grown 200,000 jobs, let's grow another million jobs in the next few years in the state of Illinois.

…What really matters is the ground game. What really matters is us getting out there and outworking these folks, and us having the message that every voter wants: lower taxes, more jobs, fighting corruption with term limits. That's the winning message. We get that message out and around, and we've put together the biggest ground game in Illinois history, the most phone calls made, the most doors knocked, and we go on to victory in November everybody. On to victory in November!