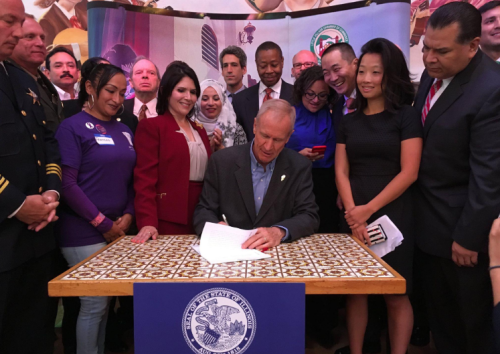 SPRINGFIELD – Friday, a national immigration group defied Governor Rauner's claim earlier this week that Illinois is not a sanctuary state.

In an effort to unite his Republican base, Rauner said Wednesday, "…We can have issues where we can disagree, and by the way, I'm adamantly against illegal immigration and we are not a sanctuary state, and we'll never be one. I oppose that. But, you know what? We gotta unite."

Governor Rauner and his advocates have insisted for a year that Illinois is NOT a sanctuary state – despite the bill he signed last year forbids local law enforcement from being in direct contact with the federal Immigration and Customs Enforcement (ICE) agency about persons that are in the country illegally that law enforcement is releasing from local imprisonment.

"ALIPAC finds Governor Bruce Rauner's comments claiming Illinois is not a sanctuary state to be both false, disingenuous, and dangerous since the Chicago Tribune ran the headline "Illinois is officially a ‘sanctuary state’ for (illegal) immigrants" on August 28, 2017 after Rauner signed the Trust Act into law at a Mexican restaurant with a mariachis band playing!" Gheen said.

"The Trust Act denies local law enforcement the ability to detain people on behalf of Immigration and Customs Enforcement (ICE) which means Illinois is a sanctuary state," Gheen said. "Governor Rauner and the lawmakers who supported The Trust Act hold some degree of responsibility for all of the lost jobs, taxpayer resources, damages, injuries, and deaths caused by illegals on their watch."

As for Rauner's comments attempting to unify Illinois Republicans, Gheen suggested the effort was meaningless. As a matter of fact, Gheen holds Rauner and those that agreed with him on the measure responsible for so many illegal aliens picking their ultimate destination as Illinois.

Before signing the Trust Act, the governor refused to speak with Illinois families who have lost loved ones at the hands of immigrants in the country.

Other Illinois Review stories on immigration

By Paul Schimpf, Guest ContributorOn Friday, January 27th, the...
Previous article
Di Leo: Another Election Year, Another Array of Election Abuses
Next article
Di Leo: The Priest Scandal and the Statute of Limitations