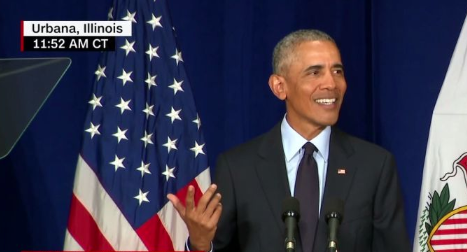 CHAMPAIGN – Former President Barack Obama unleashed pent up frustrations about the current president's policies, behavior and temperament Friday while accepting an ethics award at the University of Illinois in Champaign.

With the 2018 election weeks away, Obama urged the U of I students to passionately engage in political activism because "our democracy depends upon it."

"You can be the generation that at a critical moment stood up and reminded us just how precious this experiment in democracy really is, just how powerful it can be when we fight for it, when we believe in it," he said.

But all his comments were not so altruistic. He criticized the Republican Party, saying "the politics of division and resentment and paranoia has unfortunately found a home in the Republican party," Obama said.

He pointed to the party as embracing conspiracy theories like the legitimacy of his birth certificate, doing what it could to limit voting rights and rejecting science and the resulting climate change.

"I don't mean to pretend I'm channelling Abraham Lincoln now, but that's not what he had in mind, I think, when he helped form the Republican party," Obama said. "It's not conservative. It sure isn't normal. It's radical."

He said America's "fear of progress" didn't start with Donald Trump. He's a symptom of the nation's hesitation to embrace Democrat political ideals.

"It did not start with Donald Trump. He is a symptom, not the cause," Obama said. "He's just capitalizing on resentments that politicians have been fanning for years, a fear and anger that's rooted in our past but it's also born out of the enormous upheavals that have taken place in your brief lifetimes."

In a state whose Democrat leadership  embraces Obama's ideals and is on the brink of financial disaster, social decline and political cynical depths, the audience enthusiastically cheered and applauded Obama's comments.

By Illinois ReviewBack in 2017, when Republican National Committee...
Previous article
New York Times tells us what we already know: the 6th CD race will be close
Next article
Trump’s ultimate hate crime: Obstruction of Liberalism