Where’s Weyermuller? At the Kennedy Expressway Protest on Labor Day 2018 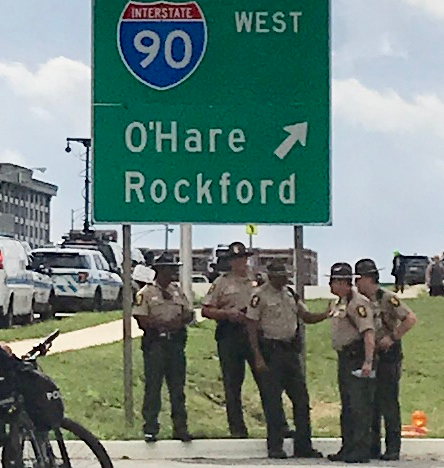 On Labor Day Monday, a group of about 40 protesters tried to shut down the Kennedy Expressway at the Cumberland entrance ramp near O'Hare Airport. They were not successful in stopping traffic.

The Illinois State Police, Chicago Police, IDOT, and the Park Ridge Police had over 500 people in place to handle any and every contingency. Twelve protesters were arrested on the ramp. The group of about 40 people was led by Pastor Greg Livingston of the New Hope Baptist Church. In early August, he was part of a group that closed down Lake Shore Drive. After closing the drive, they marched to Wrigley Field. There were no arrests made that day with about 150 protesters.

At Monday's protest there were over 200 media people with about 150 police. Law enforcement shut down both sides of the drive for about 45 minutes, causing huge traffic delays on the whole northside.  The protest also closed major streets like Belmont, Broadway, Addison, and Clark. In July, another group led by Father Michael Pfleger had a protest against violence, closing the Dan Ryan Expressway on the city's southside. No arrests were made there. Several other groups attended the event Monday, including IGOT, which stands for Illinois Guns Owners Together. Their members stood on an overpass nearby. In addition, two Chicago aldermen were across the street, Anthony Napolitano (41st) and Nicolas Sposato (38) holding signs which said, “We support our police.” The numbers are in from Monday with 40 protesters, 12 arrests, 450 cops, 200 official media, 100 IDOT, 150 onlookers, and at least one citizen journalist, that being me. There are no official estimates, but with holiday pay and overtime, the cost surely will be in the hundreds of thousands of dollars.

One of the demands of the protesters was that Chicago Mayor Rahm Emanuel resign. Tuesday, one day after the protest, Emanuel has announced he is not seeking re-election. Perhaps their march was successful?

Meanwhile the violence in Chicago continues. According to Heyjackass.com, there have been 394 killed with 2091 shot this year to date.
We can only hope and pray that solutions can be found to stop the violence.  There is much debate about whether marching and attempting to close highways will do anything to make a difference.
Mark Weyermuller is small-business owner, real estate professional, and conservative activist in Chicago. He is a citizen journalist and regular contributor to Illinois Review. Mark can be heard weekly on the radio in a "man in the street segment" at 5:31pm as a regular guest on the Stephanie Trussell Show heard Saturday afternoons 3-6pm on 50,000 watt WLS 890-AM.