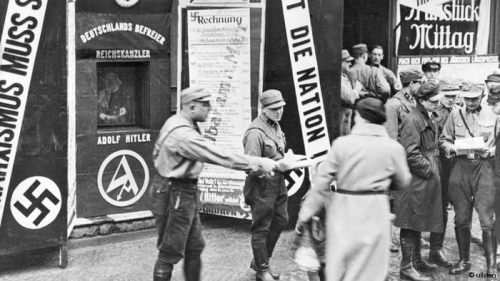 It was in 1951 that Upton Sinclair, author of the anti-capitalist "The Jungle," who himself ran two times for Congress on the Socialist Party ticket, wrote to Norman Thomas, who at the time was the party's perennial candidate for president:

The American People will take Socialism, but they won’t take the label. I certainly proved it in the case of EPIC. Running on the Socialist ticket I got 60,000 votes and running on the slogan to ‘End Poverty in California’ I got 879,000. I think we simply have to recognize the fact that our enemies have succeeded in spreading the Big Lie. There is no use attacking it by a front attack, it is much better to out-flank them.

50 years of educational dumbing down and academic indoctrination seems to have brought about the notion that socialism, instead of being perceived as a fool's paradise, is now being seen as a promising dream, especially among Millenniums. Twenty and 30 year olds have been convinced by the Bernie Sanders of the world that taking from the rich and giving to the poor makes sense, never having been taught the math doesn't work out.

Regardless of how many times Socialism has been given another chance, it has failed miserably wherever it's been tried.

Unfortunately, things are not likely to improve anytime soon because the study of History has been replaced on college campuses by an assortment of grievance courses such as Black Studies, Gender Studies, Latino Studies and Lesbian Studies, curriculum that leads only to careers as members of street mobs and the wearing of black masks or pink caps, and a paycheck from billionaire and Socialist, George Soros, whose dark money funds the ideology of the Democrat Left through his network of umbrella groups.

It has been reported that George Soros gave hundreds of millions of dollars to the pro-abortion groups which attacked U.S. Supreme Court nominee Brett Kavanaugh. It's difficult to figure out why the billionaire currency manipulator, George Soros, who got his start in life as a Nazi collaborator in Hungary, separating his fellow Jews from their valuables, is still walking free. Inciting violence was still a crime, but Soros, who finances Black Lives Matter, Antifa, on-campus vandalism and the mobs whose sole purpose in life is to intimidate congressional Republicans and members of Trump’s administration, hasn’t even been indicted. What excuse do Republican have for not bringing Soros up for charges?

If kids hadn’t been so easily brainwashed by agenda-driven propagandists posing as professors, they might have learned that what began as a campaign of terror waged against German Jews in the early 30s eventually and inevitably was expanded to victimize Catholics; Communists; homosexuals; mental and physical defectives; intellectuals; and those who simply refused to knuckle under to the bullies and perverts out to steal their freedoms and enslave them.

Once a nation, any nation, loses its moral compass, insanity ensues.  Here in this nation we have already seen the parallels to Nazi Germany.  Hitler had his Brown Shirts, armed bullies he could call on to break the shop windows of Jewish merchants, beat up homosexuals and burn the books that reminded people of their common humanity and their God-given rights.

Today, we have Antifa and campus bullies who intimidate students and professors who refuse to knuckle under to the Left.  When craven college administrators refuse to suspend, expel or even have the police arrest members of the mob, they are behaving exactly the way their currish colleagues behaved 85 years ago.

What’s more, many people believe that the Nazis didn’t have laws or courts, but that’s not true.  There were judges and laws, but they were Nazi judges and Nazi laws.  That meant that once accused, people were presumed to be guilty, even if their accusers couldn’t provide evidence or corroborating witnesses.  Sound familiar?  If it doesn’t, ask Brett Kavanaugh and I’m sure he’ll be able to fill in the blanks.

Yet another parallel to the bad old days can be found in the media.  When, the day after Brett Kavanaugh defended himself against the lies of Christine Ford, Cory Booker, Kamala Harris, Mazie Hirono and Richard Blumenthal, it’s no accident that you could pick up a copy of the New York Times, the Washington Post or turn on most of the cable news shows and read or hear about Kavanaugh’s lack of “judicial temperament.”

Left excels in playing Us off against Them

A favorite sport of the Left is playing Us off against Them.  In Germany, “them” were the Jews, at least to begin with.  In America, Jew-hatred takes the form of the Arab and Muslim-driven divestment movement targeting Israel.  But the Left has expanded the divisions to include rich versus poor, black versus white, female versus male, atheist versus believer, old versus young and citizen against illegal alien.

Things have become so totally loony that the one group that is openly despised consists of white people, particularly old white men.  People like Joe Biden, Joy Behar, Chuck Schumer and Nancy Pelosi, don’t even think twice before charging white people with the sins of the world.  Apparently, they seem to think that so long as they’re the ones leveling the insults, that automatically makes them exceptions to the rule.  No doubt that’s what some German Jews thought in 1933 when they sat around the dinner table and said things like: “Hitler’s not all wrong."

https://dailycaller.com/2018/07/05/marxist-radicals-democratic-party    In July of this year DNC chairman Tom Perez said:  Democratic Socialists of America member Alexandria Ocasio-Cortez “represents the future of our party.” DSA chapter chairs have agreed that “communism is good.”  Members of the DSA espouse a kind of radicalism that has not been represented in mainstream American politics for generations.  It's a major movement explicitly hostile to the economic notion of private profit has been unseen since the Soviet era which advocates policies far outside the mainstream of a ruling party in any major democracy today.  The DSA's constitution proclaims its members are “socialists, because we reject an economic order based on private profit, alienated labor, and gross inequalities of wealth and power.

While the above might sound far-fetched to some, it should especially be disturbing to old school Democrats who certainly can't condone the taking over of their party of choice by radicals and Marxists. But what about millennials?

Almost a third of millennials identify as Democratic socialist or socialist

As reported by the Daily Caller, thirty-one percent of millennials (almost a third) identified as a Democratic socialist or socialist, according to a  study by Maru/Blue and BuzzFeed News  released on October 4, 2018.  Also reported was that millennial men were far more likely to identify as some kind of socialist, with a total of 40 percent responding affirmatively to the question.  Furthermore, a total of 28 percent of respondents said they would be “Much more likely” or “A little more likely” to vote for a candidate running for political office if he referred to himself as a “socialist.”

VICE magazine recently wrote about the burgeoning socialist movement among millennial young people, citing a poll showing that two-thirds of them can’t even define their ideology, which is government ownership of the means of production, like land, labor, and capital.  In the VICE article Marion Smith, executive director of the Victims of Communism Memorial Foundation, whose last year's commissioned poll determined that 69 percent of millennials had trouble correctly defining socialism, argued:

Millennial socialist politicians like Alexandria Ocasio-Cortez know what socialism is but don’t know how to pay for it; however, today's young socialists seem to think the government spending money on anything they like is “socialism.”, even the building of roads!

As noted in this article:

Regarding the messaging problem, the trend toward socialism is already well advanced in our young through a deeply flawed education system that is teaching Marxism to the very young through Common Core.  University of Wisconsin professor Dr. Pesta described Common Core as the pulling down of cultural Marxism into the public schools." See here Thorner's Illinois Review article of October 3, 2018.

As to the first statement, it is relevant as this nation approaches a fork in the road with the November midterm elections, at a time when the entire Democrat Party seems to have drunken deep of the socialist Kool-Aid.

Have voters been so brainwashed as to elect candidates who represent a political party that can now be defined as exhibiting traits of lunacy, hysterics, and disobedience among its members, and who further will raise your taxes, support open borders, and proceed with their fervent desire to destroy Trump and his presidency?  I certainly hope not.

It’s up for voters to decide.  Will they vote to continue President Trump’s ongoing and tireless Make America Great Again work or will they put back in power those who seek to resist and destroy.  Your vote will help decide the future and soul of our nation.

Executive Directors MessageRichard Pearson Yesterday, January 25, 2023, our attorney...
Previous article
Obama’s Embrace of Socialism is a Troubling Sign of Things to Come
Next article
Wallace: A Vote that glorifies God