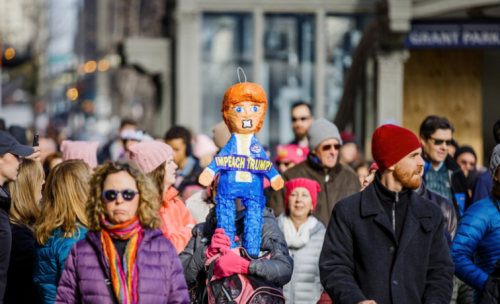 CHICAGO – Organizers of this year's Women's March say there were 300,000 on Chicago's streets Saturday excoriating President Donald Trump, Vice President Mike Pence and the Republican majority in the U.S. Congress.

So was a Republican candidate for State Senate in the 23rd District in the parade that surprised fellow GOPers — Bartlett resident Seth Lewis. Lewis is attempting for the second time to beat incumbent Democrat Tom Cullerton in November. Lewis lost to Cullerton by a little more than a thousand votes in 2016.

Not only were the Women in attendance angry with Republicans, their "Resistance" signs supported illegal aliens, Planned Parenthood, Black Lives Matter and countless other Leftist, anti-conservative causes.

Lewis' Facebook post said he attended with his wife in support of "equality and diversity" which, he wrote, are not "partisan issues." An array of photos by James Richards IV of the Women's March are HERE.  (Warning: lots of obscenities)