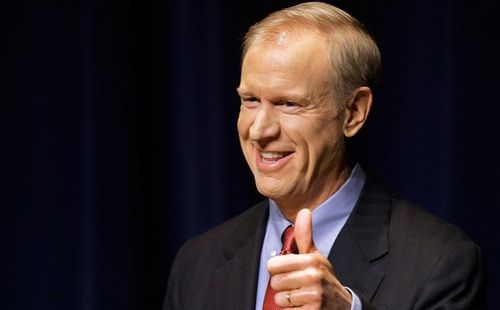 CHICAGO – Saturday night, Governor Rauner – a Republican that refuses to reach out to the Illinois' GOP social conservative base – will celebrate abortion, gay rights and transsexualism by keynoting a banquet.

A full house of nearly 1,500 people is expected at the 2018 Equality Illinois Gala on Saturday night to hear about the successes and ongoing challenges of building a stronger Illinois in the face of national headwinds against LGBTQ civil rights.

The gala, which benefits the yearlong statewide LGBTQ civil rights work of Equality Illinois Institute, will recognize Planned Parenthood of Illinois, transgender youth activist Jazz Jennings, and longtime LGBTQ activist Jim Bennett. Guests will also hear from three Illinois residents who will speak on the multidimensional work of the organization and how their lives have been directly impacted by it.

Illinois Gov. Bruce Rauner, Chicago Mayor Rahm Emanuel, and 100 other elected officials and candidates will be introduced, plus community members, dignitaries, and allied supporters plan to attend the gala, which is annually the Midwest’s largest LGBTQ formal celebration, on Saturday, February 3, 2018 at the Hilton Chicago. Some of the world’s most recognizable corporate and brand names are among the sponsors of the event.

“On the national level we are seeing a really big rise in anti-LGBTQ sentiment, particularly from the administration in Washington,” said Brian C. Johnson, CEO of Equality Illinois. “Seeing that happen in Washington, so many of our allies and champions in the state just were willing to say those efforts and actions don’t represent our values here in Illinois, and it’s incumbent upon us to make sure that Illinois demonstrates its values of being a fully equal and inclusive state. We will be celebrating that commitment at the gala.”

Three significant legislative wins over the last year, achieved with bipartisan support, include laws to end the anti-LGBTQ panic defense, modernize the state law so transgender Illinoisans can get correct birth certificates without surgery, and build LGBTQ representation on state boards and commissions.

“However, our conversations with LGBTQ people throughout Illinois bring home the challenges they continue to face in our schools, in accessing health care, and in the criminal justice system, and we will be discussing at the gala how we plan to tackle those issues in the years ahead,” Johnson said.

The three honorees will be recognized Saturday night for working to improve the lives of LGBTQ people. For her activism on behalf of her fellow transgender youth, Jazz Jennings will be honored as the first recipient of the Equality Illinois Spotlight Award. The 2018 Freedom Award will be presented to Jim Bennett, recently retired after 11 years at Lambda Legal, for his work throughout the Midwest fighting for LGBTQ rights, including chairing the Illinois Unites for Marriage coalition. Planned Parenthood of Illinois will receive the Business Leadership Award for its century of providing reproductive health care and expansion in recent years into providing transgender health care services.

Illinois businesses and the state’s philanthropic community continue to provide robust support for the gala and the ongoing work of Equality Illinois.

The Presenting Sponsor of the 2018 Equality Illinois Gala is United Airlines.

By Illinois ReviewIn a Facebook post on Tuesday, former...
Previous article
UPDATEx1: IL GOP Chairman responds to ‘Thank You Bruce Rauner’ Campaign Ad
Next article
New Survey Ranks Rauner One of the Most Unpopular Governors Up For Election