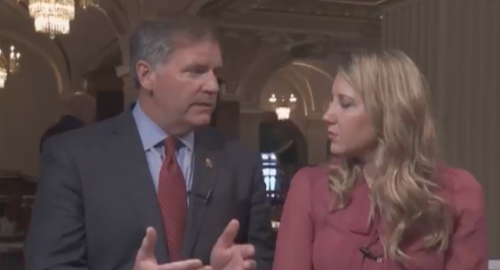 SPRINGFIELD – Illinoisans statewide haven't heard much from Bloomington-based state Senator Bill Brady since he lost his 2010 bid for governor to Pat Quinn, but he's now the Senate Republican Leader and Wednesday he stepped forward to show his support for Governor Rauner's proposed "balanced budget."

Why put "balanced budget" in quotes?  Because the governor called for a $1 B tax cut with his proposal that balanced with last session's 32% tax hike worked in – the same one the governor boasts that he vetoed.

"Within hours of presenting a spending plan that doesn’t even bother to budget to the goal of a rolled-back tax hike, Rauner released a campaign ad promising to 'immediately roll back the income tax hike,' Ives said in a statement.

“He must think that we are all really stupid,” said the state representative. “With HB 40 and the sanctuary state bill, Bruce Rauner sold out social conservatives. With yesterday’s budget proposal, he sold out fiscal conservatives. Rauner’s job of selling out Illinois conservatives continues unabated.”

Additionally, Ives said, Rauner's budget proposal could mean massive property tax hikes as a result of his plan to shift unfunded pension obligations from the state to school districts without giving school districts the authority to change the retirement plans they offer employees.

"It’s another blame-shifting unfunded mandate from the 'I’m not in charge' governor," Ives said. “It's totally clear that Rauner doesn’t understand conservatives. He doesn’t respect conservatives. That’s why it’s easy for him to continue to betray us,” said Ives.

Brady, who ran as a conservative Republican in the 2010 governor's race, was pleased with the governor's proposal: