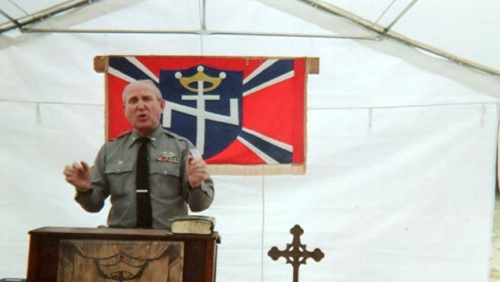 CHICAGO – Upset that the only choice Republicans in the 3rd CD have on the November ballot is a known Nazi sympathizer, a group of Cook County GOP members of the Jewish faith called on Cook County GOP Chairman Sean Morrison to step down in a letter sent to Cook County GOP committeemen:

To the Committeemen of the Cook County Republican Committee:

We are confident that each of us is appalled at the fact that Arthur Jones, an avowed Nazi sympathizer and Holocaust denier, ran unopposed in the primary for the Republican nomination to the 3rd Congressional District, and is now the Republican nominee on the ballot.  And, needless to say, our local party looks like a group of incompetent fools.  But what is infuriating is that the nomination of Jones could easily have been prevented.

According to a former Palos Township Committeeman, Arthur Jones was well known in the 3rd Congressional District for being a Nazi sympathizer, Holocaust denier and perennial candidate.  In the past, the local party officials have always recruited candidates to keep Jones off of the general election ballot.  But, inexplicably, not this year.

Sean Morrison is State Central Committeeman for the 3rd Congressional District, Cook County Chairman and Palos Township Committeeman.  Given these multiple key spots, and in particular his role as State Central Committeeman for the district in which Jones was running, we believe that it was undeniably Morrison's responsibility to take action to stop Jones.  Yet when the State Central Committee met in February 2018 and discussed Jones' success in getting on the November ballot, Sean Morrison admitted that he knew of Jones' upcoming candidacy as early as October 2017, a month and half before the deadline for Nomination Papers, but claimed that he could not find another candidate to block Jones.

This excuse is outrageous and unacceptable.  We urge all to review the geography of the 3rd Congressional District.  It has only a narrow segment in the City of Chicago, then broadly weeps though the southwest suburbs with towns such as the Palos communities, Orland, Homer Glen, Crestwood and Lockport, running as far as the border of Joliet.  The idea that no Republican candidate could be found is laughable.  It is obvious to us that this was not a matter of no one being found, it was a case that no one bothered to even try and recruit.

In addition, Sean Morrison and Palatine Township Committeeman Aaron Del Mar have endorsed an anti-Semitic judicial candidate for Circuit Court in the 13th Judicial Sub-circuit, Christine Svenson, despite their knowledge of past anti-Semitic comments made by her.  It is no empty charge because there is a witness to Svenson's anti-Semitic comments.  Morrison and Del Mar did nothing, and simply ignored the anti-Semitism since Svenson is their political "ally."  Therefore, we have refused to attend meetings of the County Central Committee so long as Svenson has been appointed as the General Counsel of the Cook County Party, sitting at the dais at all meetings.  Of course, not one bit of change occurred, as our leaders knowingly and arrogantly tolerated prejudice that has no place in our Party.

Other members of the State Central Committee who were made aware of Svenson's prejudice, Ryan Higgins, Blair Garber, and Carol Donovan, took no interest or action.

By Illinois ReviewIn a serious blow to Illinois Gov....
Previous article
The controversial 3rd CD Republican candidate for Congress in his own words
Next article
Rhoads: This week’s ERA Senate victory is bogus