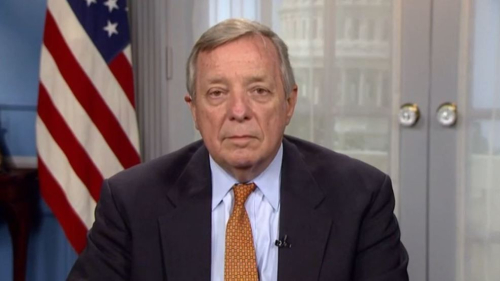 It's not ridiculous to discuss impeaching President Trump, though, he said. "It's too soon."

Durbin was asked if he agreed with Democrats suggesting the Kavanaugh hearings scheduled to begin September 4th should be protested.

CORNISH: Chairman Grassley certainly plans to move forward. Would you boycott the hearings if they do?

DURBIN: I think that's a mistake. I really believe that we should be part of the hearings to ask questions. And the issue, which I raised repeatedly with Judge Kavanaugh and would raise with the American people – why? Why has this administration decided that his 35 months serving in the White House as staff secretary to the president of the United States should not be examined? The voluminous documents that were produced during that period of time touch every major issue in America. The same issues…

CORNISH: But there's not much more you can do to stall, right? I mean, if Chairman Grassley is going forward, it just seems like this thing is not going to be delayed, and you guys are powerless to stop it.

DURBIN: It's true. We're a vote short. And we're in the minority. That's what elections are all about. And if Chuck Grassley, who is a friend, decides to take a different course than we ever have on a Supreme Court nominee, there's isn't much we can do without some Republican help.

And a short discussion on the "i" word -

CORNISH: Up until this point, leaders like Senator Schumer and Nancy Pelosi in the House have essentially discouraged talk of impeachment – right? – especially heading into the midterm elections. But the news this week has brought that back to the forefront. What is your response to Democrats who say, look; we should be talking about this; this should be a goal for the party?

DURBIN: Put this into constitutional and historical perspective. This may be the most serious penalty imposed by the Constitution – the removal of an executive by the congressional or legislative branch of the government. It has never been done in the course of our history. And as a consequence, we ought to take this extremely seriously. I don't believe people who use the term impeachment without serious thought really serve our country. The American people expect us to look at this honestly, soberly and, I hope, on a bipartisan basis. And it's way too soon to do that.

The rest of Durbin's comments on Kavanaugh on NPR