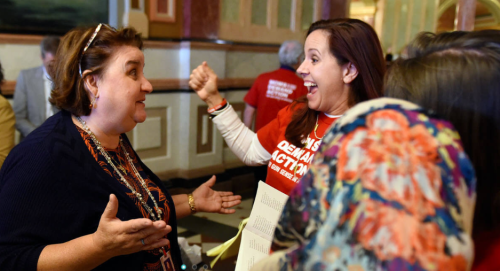 Rep. Willis refers to the at least 26 Illinois counties outside the Chicago area have passed pro-Second Amendment resolutions as "nothing more than scofflaw counties" in a House resolution she filed late last week. Her resolution challenges the legitimacy of county declarations and names each county action as a “shameless political stunt which undermines the rule of law and threatens the safety of all Illinois citizens.”

HR 1197, which could be voted on when the General Assembly returns after the election, says:

WHEREAS, Gun violence is an epidemic in America and in Illinois, touching all parts of the State; and

WHEREAS, The legislative and executive branches of the State have lawfully regulated guns and gun trafficking; and

WHEREAS, The U.S. Supreme Court has upheld the constitutionality of reasonable state gun violence prevention regulations; Conservative Supreme Court Justice Samuel Alito stated in the McDonald decision that state "experimentation with reasonable firearms regulations will continue under the Second Amendment"; and

WHEREAS, President Trump's administration appears to be willfully ignoring the problem of gun violence in America, and at the same time, is attempting to coerce municipal police forces into diverting their resources towards harassing immigrant populations; some municipalities have lawfully opposed having their local law enforcement used for such purposes and have been dubbed "sanctuary cities"; and

WHEREAS, Some counties in Illinois have erroneously tried to liken the cause of a sanctuary city with opposition to gun violence prevention measures by declaring themselves "gun sanctuary counties", thereby declaring their intention to refuse to enforce any gun safety measures lawfully passed by the State with which they disagree; and

WHEREAS, These counties are trying to use those lawful sanctuary cities as an excuse to unlawfully ignore important, democratically-implemented, state laws; and

WHEREAS, These so-called "gun sanctuary counties" are nothing more than scofflaw counties, usurping the judiciary and role of separation of powers in our government, while openly encouraging criminal behavior; therefore, be it

RESOLVED, BY THE HOUSE OF REPRESENTATIVES OF THE ONE HUNDREDTH GENERAL ASSEMBLY OF THE STATE OF ILLINOIS, that we condemn these scofflaw counties and declare their attempts to label themselves as "gun sanctuaries" as an unconstitutional and shameless political stunt which undermines the rule of law and threatens the safety of all Illinois citizens.