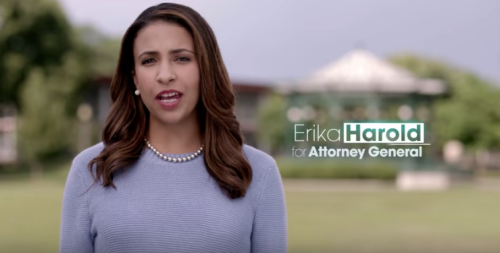 SPRINGFIELD – Illinois voters will be picking a new attorney general in November, and 20 percent of the electorate has yet to decide who will get their votes  – Democrat Senator Kwame Raoul or Republican attorney Erika Harold. Among those that have decided, Raoul is outpacing Harold by 12 points, a recent survey by the Illinois Broadcasters Association says.

Harold, who has received substantial financial support from GOP Governor Bruce Rauner, has been the focus of her opponent's recent attack ads. In one ad, Harold is quoted during her college years saying she'd rather send children to be adopted by an abusive heterosexual couple than to a same sex couple. The ads have been effective in turning up the dial on Harold's unfavorables.

When asked about the controversial comments earlier this year, Harold said in the News-Gazette she didn't recall the specific exchange during an interview in the Miss America pageant she won in 2003. "But if I said it," Harold said, "it was absolutely wrong and I couldn't be more clear than my position today is I support same-sex adoption and same-sex foster parenting… I'm running for attorney general because I want to make sure that everyone is treated fairly under the law."

Monday, Harold released a new ad turning the tables on Raoul and connecting him to the Democrat powerhouse Mike Madigan. Raoul will do "Anything" to be elected and "Anything" for Madigan, the ad says.