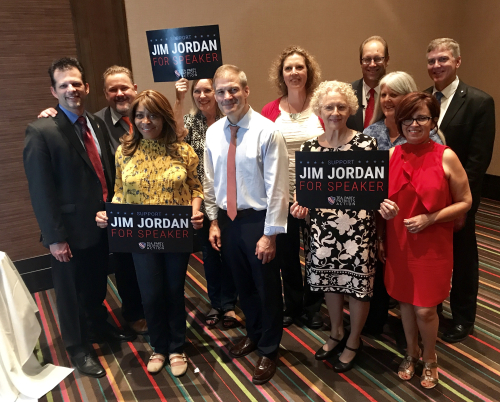 Ohio Congressman Jim Jordan visited with Illinois conservatives Saturday night in the Chicago suburbs. He is a member of the House Freedom Caucus and a lead contender to be the next speaker of the US House if Republicans can hold the majority.

Jordan spoke of the challenges in Washington D.C., along with a great sense of optimism for the future. He spoke of support for President Trump and his agenda. Afterwards, the congressman graciously shook hands, listened to constituents, and took pictures with practically everyone in the room.

Jordan was in Illinois as the guest of the Illinois Conservative Union, which held their third annual grassroots activist conference Friday and Saturday. The group met at the Midwest Conference Center in Northlake, near O’Hare Airport. “As we confront the challenges here in Illinois, we are faced with ‘fight or flight,’" the ICU program explained. "The poor policies and corruption in Illinois government have proven to be devastating to Illinois families. Those in the ICU coalition discovered that we have a common vision. That vision is to join together and FIGHT BACK for the sake of our loved ones and our personal property.” One of the many highlights was the singing of the national anthem by Raquel Melanie on Friday and Bobby McNeily on Saturday. In addition, the networking was wonderful with likeminded people promoting freedom liberty, and opportunity.

Watch for more information and events from the Illinois Conservative Union. Their website is Ilpac.org.